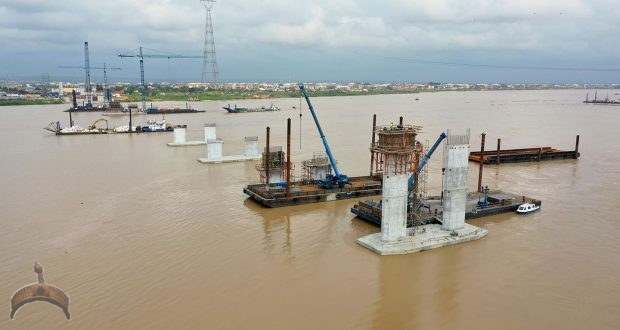 The Second Niger Bridge Is Not Igbo Bridge

Posted by: AbubakarMuhd in Metro life Comments Off on The Second Niger Bridge Is Not Igbo Bridge

Similarly, the people of Onitsha don’t own the bridge more than the people of Asaba. Anambra and Delta states are two equally gateway states on the eastern and western flanks of the bridge. As far as the bridge is concerned, the two are equal.

I have never heard or read of politicians/stakeholders in Delta and Edo states laying claim to the bridge as those in the South-East have been doing. The misguided insinuations about the bridge being of more value to the South-East should stop if the people really want the bridge to be completed, otherwise, the powers that be might decide to abandon it if it and nothing will happen.

My comments are a reaction to the recent claim by the Chairman of South-East Governor’s Forum and Governor of Ebonyi State, Dave Umahi, who, over the weekend, reportedly described the pace of work so far recorded by the Federal Government on the Second Niger Bridge as a major achievement for the South-East geopolitical zone.

It bothers me that leaders who ought to be measured in their remarks express flippant talks just for political gratification. President Buhari is not asking for praise because there is not yet any major achievement on the bridge until it is completed. Pillars and cross beams under construction are not the bridge. It is the completion of the bridge that would constitute what may then be called a major achievement. We are hoping that the bridge will be completed and not abandoned. Until then, it is better for politicians to hold their peace.

What the elite should do is to help sort out any encumbrances delaying the work. Something like the court cases pitching the Federal Ministry of Works and Housing with the host communities should be sorted out for the work to continue unhindered.

Work on the bridge began in May, 2015. Ever since then, the rumour mill has been awash with all kinds of speculations. The South-East zone appears to be the most agitated. I would like to stress that the Second Niger Bridge is not an Igbo project. A bridge that equally bestrides Anambra State at Onitsha and Delta State at Asaba cannot belong to the Igbo alone. I, therefore, can’t understand why only the Igbo appear to be too forward about the bridge. Everybody should be calm and stop politicizing the bridge that would, in other climes, go unannounced until it is completed.

For example, last year 2018 October, the Chinese President Xi Jinping, officially opened the world’s longest sea crossing bridge measuring 55 kilometres with its access roads. Nobody heard about it while it was under construction.

But in our own case, not long ago, while the Ohaneze Ndigbo, reportedly warned President Muhammadu Buhari not to stop work on the Second Niger Bridge, the Aka Ikenga also issued a statement condemning the cessation of work on the bridge. Earlier on, the Ohaneze Caretaker Committee lamented that former President Goodluck Jonathan “lied to Ndigbo about awarding a contract for the construction of the Second Niger Bridge. There is no need for all this hysteria from the Igbo.

My fear is that these statements could derail the bridge project rather than enhance it. An attempt to establish the truth led me to investigate the bridge project. The truth is that the bridge does not serve the South-East more than it serves the South-South and South-West that have direct links to it. I am afraid that if this bridge is branded an Igbo project, it would be treated like everything Igbo. The bridge should be left to the Federal Government and the international investors to realise the project.

The first Onitsha-Asaba Niger Bridge was completed in December 1965. Built by the French construction giant Dumez, the bridge linked the defunct Eastern and Western regions of Nigeria. Today, it is the major corridor of trade between the South-East, South- South, South-West and North-Central zones. At the time the bridge was conceived, Nigeria was mainly an agrarian economy. Thus, the bridge served as the avenue for transporting different agricultural products – palm produce, timber, rubber, etc. Prior to the construction of the bridge, these commodities were ferried across the River Niger between Onitsha and Asaba using canoes.

Owing to rapid economic development and population growth, pressure began to mount on the bridge, especially during festive periods. The bridge has been overstretched beyond its capacity. There is apprehension that it might collapse with catastrophic consequences to lives and properties. To forestall such disaster, the idea of a Second Niger Bridge was conceived.

The Second Niger Bridge was on the drawing board for many decades. Successive administrations in the country paid lip service to its construction. It was President Goodluck Jonathan that finally flagged off the construction of the bridge and actual work started. To that extent, it is wrong to accuse Jonathan of lying to Ndigbo about the bridge. Jonathan thought that he would win a second term during which he would complete the bridge. But he lost the election. The history of the bridge cannot be written without mentioning Goodluck Jonathan.

According to information, the project, which is divided into three phases, will bypass Onitsha and Asaba to connect the Owerri-Onitsha Expressway at Nkwerre-Ezunaka, and then cross Atani to the Asaba-Benin Expressway at Okpanam with a total length of 44 km. With this length, the Second Niger Bridge will be competing with the world’s longest bridge in China (55 km)!

The project is being constructed under a Public Private Partnership (PPP) scheme. A Consortium, JB-NSIA, is working on the project on the basis of Design, Build, Finance, Operate and Transfer (DBFOT), at a total cost of N108 billion. The initial cost estimates may have risen owing to inflation. The Bureau of Public Procurement (BPP), reviewed the concessionaire’s cost of N138 billion down to N108 billion.

The project phases will be constructed under Engineering, Procurement & Construction contracts awarded by the Federal Ministry of Works (FMW). The Federal Government committed to contribute N30 billion (28%) of the project cost. The remaining 72% will be raised by the Consortium under a 25-year concession. The Federal Government has so far committed N18.31billion as at 2015. Out of this, N10.4 billion has been disbursed leaving a balance of N7.94 billion.

A team of local and international consultants was engaged through a rigorous and competitive procurement process. The NSIA has spent the sum of $2.21 million on consultancy and another $247,586 on due diligence to determine project viability. The first-class advisory services are required to enable the project reach financial close – the point at which private capital is successfully raised.

Work on the bridge slowed down some time ago because of the rainy season that naturally stalls engineering construction work. Preliminary physical works have been completed. The Environmental and Social Impact Assessment (ESIA), is being done to meet the highest international standards to make the project eligible for long-term financing by local and international financial institutions. The Infrastructure Concession Regulatory Commission (ICRC) is reviewing the Full Business Case (FBC), and Draft Concession Agreement (CA). Once the ICRC approves the FBC, the CA will be signed and the Consortium will then raise the remainder of the project capital. On the strength of this, recent insinuations that the bridge may not meet highest standard is unproven.

It is in the country’s interest to hold onto this project because any review will definitely raise the cost owing to the depreciation of the naira. The cost of the project was reached at the exchange rate of N154/$. Now the naira exchanges at N350/$. No doubt, Nigerians want to see a second bridge across the River Niger. People should calm down. The bridge project has a development and completion time-frame of 4 years from financial close – point at which private capital is successfully raised. Soon, the countdown for the bridge will start for good if the Federal Government did not waver on this critical Nigerian project.