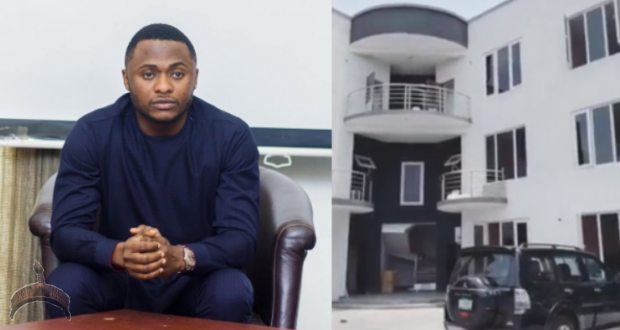 Posted by: chucks in Metro life Comments Off on Etor Residence Hotel: Ubi Franklin shows off A Hotel he Built In Abuja – Photos

Ubi Franklin took to Instagram today showing off a resort he built-in Abuja, amidst rumours of owing his alleged soon-to-be babymama N4million.

Ubi Franklin who showed off the hotel he built-in Abuja, wrote’Grateful to God with this June 2019 @etorresidencehotel ‘.  This can be a video he shared below;

Grateful to God for this June 2019 @etorresidencehotel 🙏

Recall it was reported earlier that Sandra Iheuwa called out Ubi Franklin whose 4th child she is reportedly having, few hours after it was reported that she was engaged to a different man before the music executive got her pregnant.

Sharing a copy of final terms of agreement, Sandra Iheuwa who called Ubi Franklin disclosed that she met him in 2017 in London without knowing he’s a celebrity. She further revealed that the MMMG stumbled on her seeking help to push a brand new business idea, that was when she gave him the N8m. Sandra Iheuwa also revealed that she gave Ubi money for child support, however he turned around to tarnish her image since December 2018, paying bloggers to publish fake stories about her to save lots of his image. She further added that she wants her balance of N4m before Monday or she is going to be filing a lawsuit.