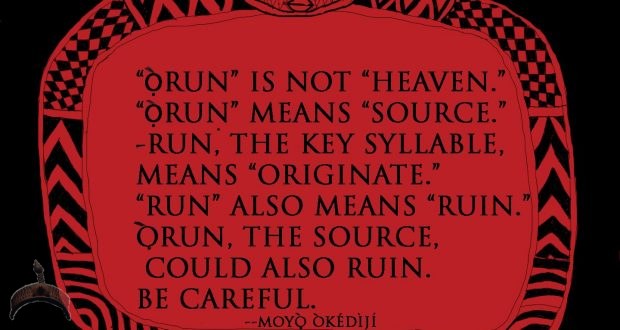 orun is not heaven

The translation of the “Ọ̀run” as “heaven” is totally misleading – Prof. Moyo Okediji‎

Posted by: ayangalu in Breaking News, Culture Comments Off on The translation of the “Ọ̀run” as “heaven” is totally misleading – Prof. Moyo Okediji‎

It turns an indigenous Oòduà (Yoruba) concept upsidedown into an Abrahamic tradition of “heaven” and “hell.” The Christians and Moslems attempted to distort the Oòduà (Yoruba) language to serve their various needs, once they translated Orun to heaven.

This is why they use contradictions such as Orun Ina (Heaven of Burning Fire, meaning Hell). How could it be heaven, and then be a place of burning fire?

The Christians and Moslems also use “rere” (good) to qualify Orun, as in Orun Rere (Good Heaven): why do they need “rere” or “good” to qualify something that is already heaven?

The problem the Christians and Moslems face is that the Oòduà (Yoruba) language has no concept of heaven or hell in its divinity.

But we have “ọ̀run,” a complex notion with polysemic interpretations that is the source of all things, both good and bad.

The Oòduà (Yoruba) ancestors anticipated the invasion by these foreign religions, and constructed for us a language that is impossible for them to invade and distort.

It is only in ignorance and carelessness that any Oòduà (Yoruba) speaker falls prey to any foreign religion.

We have the Ijapa Oke and the Ijapa Odo . There is the aquatic turtle and the land tortoise. Both can swim. Yarinbo is the female specie while Idere is the younger one. Oodua (Yoruba) is just deep Ijapa Odo Ijapa Oke