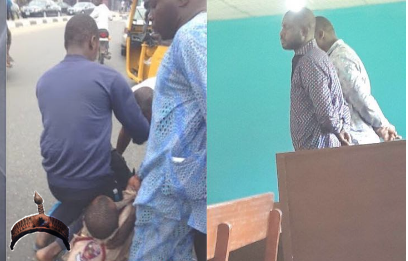 2 people remanded in prison for assaulting an FRSC official

Posted by: Lolade in Local News Comments Off on 2 people remanded in prison for assaulting an FRSC official

2 people involved in assaulting an FRSC official in Lagos, arraigned and remanded in prison .

Nwandu Onyeka and Okechukwu Jackson, were the driver and passenger in the Toyota Camry (black colour) with registration number: MUS780KJA, that was apprehended last Sunday, at railway, Oyingbo, Lagos for not wearing seatbelt, expired vehicle license and driver license violations.

The vehicle was meant to be impounded at FRSC office, Yaba, but the driver diverted on the way to the office and drove the officers to Akinhonmi Street, Jibowu, where they were assaulted. They were arrested on Sunday 6th July and arraigned on Monday.

They’re leveled with a 3-count charge of conspiracy, assault and obstruction. Both pleaded not guilty and granted bail in the sum of N50,000 with 2 sureties each. They’re remanded in prison custody as they couldn’t meet the bail conditions. The case was adjourned to 18 July 2016 for mention.

Previous: For laughing “Jealous” man allegedly brutalize woman in Benue State
Next: “I bribed policemen with N200k,”-  Driver who burnt tanker after diverting 33,000L of diesel