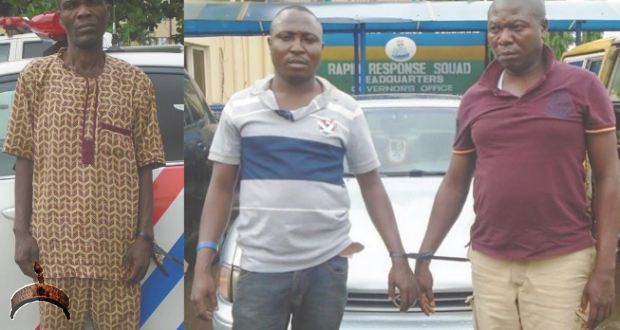 One chance operators arrested in Lagos

Posted by: Lolade in Breaking News, Local News Comments Off on One chance operators arrested in Lagos

The operatives of the Rapid Response Squad (RRS) of Lagos State police Command have arrested four suspects for allegedly swindling members of the public of various sums of money.

The four suspects were picked up separately in three incidents of fraud in Maryland, Ojodu Berger and Ajegunle between Tuesday and Thursday last week. They are Kenneth Umukoro, 36; Uba Utokcha, 41; Joseph Onuoha, 40 and Ikechukwu Okeke, 25.

According to one of the victims, Ibeh Chiwenu, she was going to Ojodu Berger from Ojota when Umukoro stopped at the bus top to pick her. She said: “As he drove along, he picked another passenger on Kudirat Abiola Way. .

We were still on Kudirat Abiola Way when the new passenger started a conversation in something like French language with the driver. The driver now pleaded that he wanted to take the new passenger to Custom’s Office on Mobolaji Bank Anthony Way, where his goods were seized.

It was here that their story changed and I became the subject of their manipulation in connivance with a custom agent and a pastor. Under the pretext that the four of us assist the man whose goods were trapped with the custom over export duties.

They brainwashed me into releasing my ATM card, led me to withdraw the last N9,000 from my account. After this, the pastor prayed for me and told me to go home and get more money my family kept at home.

On Thursday, my husband and I were standing at the Maryland Bus Stop. I saw the same Toyota Camry with the same number plate and a new driver, but beside it was the former driver that lured me into fraud, pretending to be passenger. I alerted RRS officers stationed in Maryland and they arrested them.”