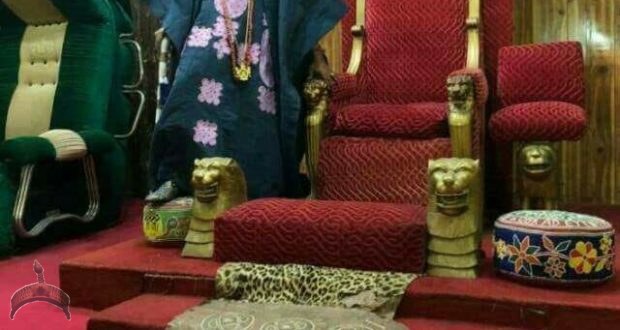 The Alaafin of Oyo, Oba Lamidi Adeyemi implores the FG to return power to regionals

Posted by: Lolade in Local News Comments Off on The Alaafin of Oyo, Oba Lamidi Adeyemi implores the FG to return power to regionals

The Alaafin of Oyo, Oba Lamidi Adeyemi, has implored the Federal government to return power to regionals as it was practised before the military coup of 1966, saying the idea of federal character has eroded merit in the country.

Oba Adeyemi made this known at a conference organised by Yoruba KO’YA Movement in Oyo State on Tuesday.

The paramount king said: “Regionalism is the way out; the current quasi-federal system of government would continue to promote hunger, ethnic intimidation, religion intolerance, infrastructure decadence. I demand for a return to where we were before 1966.

“Before the military coup of 1966 spearheaded mainly by the northerners, what we had was a regional system of government where every region controls their resources; but after they took over, they moved everything away from the region to the centre, rendering thee region powerless.”

The first monarch, who spoke in Yoruba, went through memory lane to remind the Yoruba ethnic group of how they have always been at the fore front of happenings in the country but how everything changed when “the northern soldiers came and destroyed everything; they said no more regionalism, they deceived Nigerians by establishing federal character which schemed out merit, they created Joint Admissions and Matriculation Board (JAMB), which is now causing ‘Ijamba’ to Nigerians”.

Speaking further, he said: “Today, a Yoruba man will score 240 while a Hausa man will score 120, yet they are both offered admission to study same course in the same university, they created educationally dis-advantaged states to their favour. Enough is enough.”

Also speaking at the event, Arch-bishop Ayo Ladigbolu referrred to the Judgement passed by Justice Adewale Thompson in 1969, which declared open field grazing as criminal.

“The Fulani herdsmen did not just start destroying farms today,” he said. “They have been doing that for over 40 decades. In April, 1969 Judge Adewale Thompson at Abeokuta Divisional high court with suit number AB/26/66.

Ladigbolu quoted the judge, saying; “I do not accept of the defendant that a custom exists, which imposes an obligation on the owner of the farm to fence his farm whilst the owner of the cattle allows his cattle to wander like pest and cause danage. Such a custom, if it exists, is unreasonbale and I hold that [it] is repurgenate to natural justice, eguity and good conscience. It is highly unreasonable to place the burden of fencing a farm on the farmer without also corresponding obligation on the cattle owner to fence his cattle. Sequel to that, I ban open grazing for its implications to peace and tranquilty and the cattle owners must fence or ranch their animals for peace to reign.”

Also Gani Adams, who was represented by Yinka Ogundimu, said that Yoruba people are ready to defend themselves against the any threats from the fulani herdsmen. He also called on the Yoruba to partake actively in farming.

He said: “We should work hard to secure our land but i want to call on our people to go back to farm. Let’s feed ourselves. We are ready to work with Yoruba KO’YA Movement to salvage Yoruba land. South West feed the North. For instance, 10,000 cows are slaughtered in Yoruba Land every month; N8bn is taken out of the economy of the west to the north every day through cow, onion, pepper, yam, etc. We can produce all these things to render the north useless.

“Netherlands doesn’t have oil but the country makes $100bn every year through agriculture. South west states are lagging behind on agriculture, nearly everything we consume in the south west are either imported or brought from other region. This must stop.”

Previous: Please help! Eggs theft In Poultry, what is the way out?
Next: Checkout 5 Ways To Make Money Before & During The World Cup