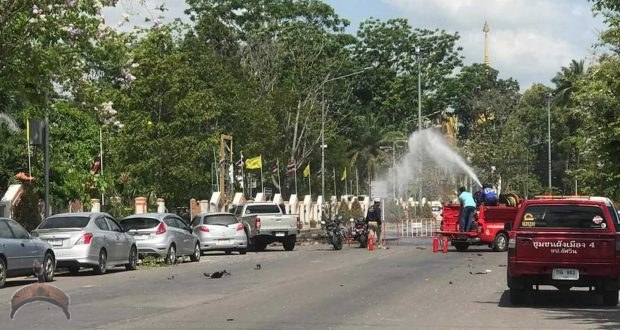 Posted by: BalogunAdesina in World News Comments Off on Car Bomb In Southern Thailand Leaves At Least 20 Injured – Video

The attack occurred while the SBPAC secretary-general, RrAdm Somkiart Pholprayoon, was meeting with governors and health officials to discuss the coronavirus situation in five southern provinces.

Surveillance video showed the bomber parking a pickup truck in front of the center and then placing another explosive device in the middle of the road before fleeing on a waiting motorcycle, said police Col. Naravee Binwae-arong of the Yala police station.

After the first explosion, the SPBAC secretary-general had instructed local people who gathered to have a look to stay in the grounds of the SPBAC, otherwise there would have been more casualties.

Police said the first bomb was a trap, intended to draw people to the scene. They were targeted by the car bomb.

“The first bomb was a grenade thrown to the area outside the SBPAC office fence to draw people out,” Colonel Pramote Prom-in, a military regional security spokesman told Reuters.

“Then a car bomb about 10 meters from the first explosion went off. This was hidden in a pick-up truck where the perpetrators parked near the fence. Eighteen are wounded and no one died,” he said.

Yala Hospital reported 20 people were hurt in the attack. None was badly injured, said Col. Pramote Prom-in, a spokesman for the center.

Pramote said guards at the center spotted the pickup truck and told everyone who had run outside after the first blast not to come close to the vehicle. Luring security personnel and first responders with an initial blast and then detonating a second device is a common insurgent tactic.

The Southern Border Provinces Administration Center in the capital of Yala province coordinates government policy in the region where a Muslim separatist insurgency since 2004 has led to the deaths of about 7,000 civilians, soldiers, government workers and rebels.

In November, coordinated attacks in Yala killed 15 security personnel, mostly lightly armed village defense volunteers, in the highest single-day death toll on the government side since the insurgency began.

The population of the provinces, which belonged to an independent Malay Muslim sultanate before Thailand annexed them in 1909, is 80 percent Muslim, while the rest of the country is overwhelmingly Buddhist. Conflict has flared on and off for decades as insurgent groups fought a guerrilla war to demand independence for the area. 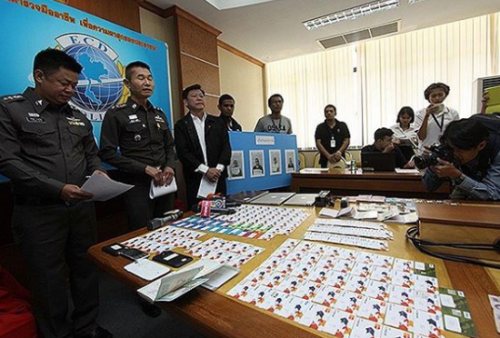 On Tuesday, Laouari Hassane Babale and Awaisou Ibrahim, were arrested in Bangkok, Thailand, in possession of 215 ATM cards issued by Nigerian banks and Bt34,200 cash. Police initially nabbed Babale, along with 16 ATM cards, while he was trying to withdraw cash. A future search at his hotel room found his alleged accomplice, Ibrahim, with the rest of the cards and cash. The pair confessed to bring the ATM cards owned by Nigerians, to withdraw money in Thailand..