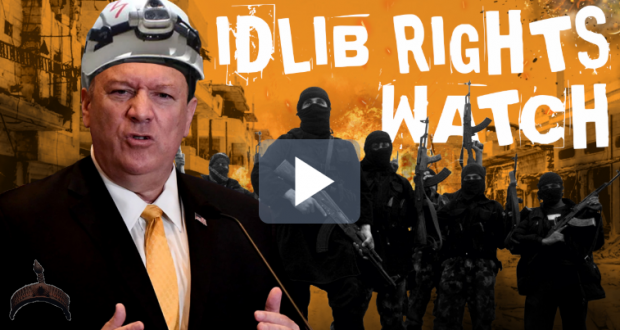 The Last White Helmet Of Idlib

Posted by: BalogunAdesina in World News Comments Off on The Last White Helmet Of Idlib

Asghar Bashpour, a top commander in Iran’s Quds Force who was close to its assassinated leader, Qassem Soleimani, has reportedly died in battle in Syria. Bashpour, who was overseeing Iranian operations in Aleppo, was killed at the forefront of clashes against “opposition forces” on February 3, reports said.

Israel has long been on the side of ISIS and al-Qaeda freedom fighters battling the oppressive Assad regime and Iran. At the end of the day, Benjamin Netanyahu repeatedly said that Iranian entrenchment inside Syria is ultimately aimed at harming Israeli security and interests, while, it must be noted, the ISIS offshoot, that has for years existed just meters away from the Israeli-controlled Golan Height, hasn’t fired a single bullet at Israeli troops. Now that ISIS is defeated, the sole democracy of the Middle East is in danger.

However, there are even more clouds hanging over the region.

Late on February 4, Assad forces broke through the defenses of Hayat Tahrir al-Sham, the Turkistan Islamic Party and their colleagues southeast of Saraqib and captured over 110km2, including the villages of Sheikh Edris, Balisah and Kafr Amim. Nearby Turkish observation posts observed this with tears in their eyes. Ankara just declared that its military had delivered a devastating blow to the regime with dozens of strikes. Turkish troops just did not expect such a cowardly attack from the defeated pro-government forces.

Fortunately, Mr. Recep Erdogan promised that his country would not allow the regime to gain more territory in Idlib. He is probably planning to flood the Saraqib-Tal Toqan road, Afs, Resafa and Sarmin with Turkish troops who will thus gain the opportunity to sacrifice their health and even their lives protecting innocent al-Qaeda members hiding in Saraqib from Assad’s aggression. A minor flaw in this approach is that the Syrian Army, supported by the Russians, can advance from more than one direction, and the danger may come from the north. What a cunning plan!

So, forces of law and order should unite to protect Idlib rebels and their leaders, and they are doing so. The United States, France and the United Kingdom called for a United Nations Security Council session to condemn the unreasonable aggression perpetrated against the al-Qaeda book club in Idlib. On top of that, the United States employed its most powerful weapon. The U.S. Embassy in Damascus, which incidentally is located outside of Syria, changed its cover photo to demonstrate a strong determination to oppose “the continued, unjustifiable, and ruthless assaults on the people of Idlib by the Assad regime, Russia, Iran, and Hizballah”.

But that’s not going far enough. To demonstrate solidarity with the Idlib peace activists, US diplomats, including Mike Pompeo and Kelly Craft, should wear white helmets and carry little black flags during all briefings and events related to the conflict in Syria. Mr. Pompeo himself could visit the city of freedom, Idlib, where he could take the opportunity to drink a cup of tea with leaders of all these groups and organizations which the State Department supports so fiercely. For sure, members of Hayat Tahrir al-Sham will be glad to hear Pompeo’s explanations for the nebulosity of the US approach towards them. It is a bit unclear why the US officially recognizes them as terrorists, when its diplomacy is aimed at supporting them.

Last but not least, the US, France and the UK can accept as refugees all these Idlib freedom fighters whom they support so that they will no longer be oppressed by the Assad regime but can enjoy real democracy.