Posted by: BalogunAdesina in World News Comments Off on President Vladimir Putin addresses the Federal Security Service Board Meeting

We always attach great importance to the work of the key power agencies pertaining to national security. Today, within the framework of this expanded board meeting we will summarise the results of Federal Security Service operations in 2014 and set priority goals for the future.

I would like to begin by saying that, as you all know, the past year was not an easy one. The world situation has exacerbated. We witnessed growing tensions in the Middle East and a number of other areas of the world, while a state coup provoked civil war in Ukraine.

Russia is making significant efforts to reconcile the parties and normalise the situation. We have already received and continue receiving thousands, even hundreds of thousands of refugees and are doing all we can to prevent a humanitarian catastrophe.

However, our position, our independent policy and even attempts to help those in need, including in Ukraine and some other areas, are causing outright irritation on the part of those we traditionally call our colleagues and partners.

They are using their entire arsenal of means for the so-called deterrence of Russia: from attempts at political isolation and economic pressure to large-scale information war and special services operations. As it was recently stated quite openly: those who disagree will have their arms twisted periodically. However, this does not work with Russia; it never has and never will.

Meanwhile, NATO is developing its rapid deployment forces and building up its infrastructure near our borders. Attempts are being made to violate the existing nuclear parity, European and Asia-Pacific segments of the ABM system are being created at an increased pace.

I would like to remind you that the unilateral withdrawal by the United States from the Anti-Ballistic Missile Treaty has toppled the very foundation of the modern international security system. Completely new systems are being developed capable of dealing a ‘lightning global blow’ and conducting operations in outer space.

However, it is obvious that nobody has ever managed to intimidate this country or put pressure on it, and nobody ever will. We have always had and always will have a proper response to all internal and external threats to national security.

Today I would like to thank you and your colleagues for your precise and coordinated work last year, for your immaculate implementation of the tasks and the courage you have demonstrated, for the reliable protection of Russia’s security and national interests.

Your overall workload and responsibility will obviously grow this year. You are facing the challenge of enhancing efficiency in all areas of your activity. Combatting terrorism remains your most important task. A few positive trends have emerged in this area in the past few years.

There were 2.6 times fewer terrorist-related crimes in 2014 than in 2013. While if we look at the previous 5 years, their overall number went down 9-fold.

Such results have clearly been made possible through the concerted actions of the FSB, security and law enforcement agencies, coordinated by the National Anti-Terrorism Committee. We must reinforce the positive dynamics and consistently squeeze out the underground criminal groups.

This is not easy; the militants are fighting back and making attacks similar to the one that took place in Grozny last year. Statistical analysis shows that they still posses a significant amount of arms.

You are also aware of the fact that citizens of Russia and other CIS states are being trained at the so-called hot-spots, including within groups of the Islamic State on the territory of Syria and other countries. Later they may be used against us, against Russia and its neighbours.

It is therefore vitally important to take additional measures to destroy the terrorists’ international ties and resource bases and block their entry to and exit from Russia. They should not be able to move between regions or penetrate the new regions of the Russian Federation – Crimea and Sevastopol.

Your direct mission is to provide the highest possible level of anti-terrorist protection for the international events to be held in Russia this year. This is, first and foremost, celebrations of the 70thanniversary of the Great Victory and the BRICS and SCO summits in Ufa.

In addition, we must step up measures aimed at preventing terrorism, radicalism and extremism, primarily among young people, migrants and underprivileged groups and more actively involve influential public and religious organisations in these efforts.

At the Interior Ministry board meeting in early March, I noted that last year the number of extremist crimes unfortunately went up by almost 15 percent. Obviously, we need to increase coordination between special services and law enforcement agencies in this area and use all the latest methods and equipment, including cutting edge information technology.

Counter-intelligence agencies worked efficiently and steadily last year. Their special operations resulted in the suspension of activity of 52 officers and 290 agents of foreign special services.

Today it is especially important to improve the protection of data that pertains to national secrets and to prevent information leaks regarding the development of our military organisation, mobilisation plans and defence and industrial technologies.

Western special services continue their attempts at using public, non-governmental and politicised organisations to pursue their own objectives, primarily to discredit the authorities and destabilise the internal situation in Russia. They are already planning their actions for the upcoming election campaigns of 2016-2018.

As I have said on numerous occasions, and will repeat again: we are ready for dialogue with the opposition, we will continue our partnership with the civic society in the broadest sense of the word. We always listen to constructive criticism of the authorities’ actions or the lack of such actions at any level.

Such dialogue and partnership are always useful, they are vital for any country, including ours. However, it is pointless entering into a discussion with those who are operating on orders from the outside in the interests of some other country rather than their own.

Therefore, we will continue paying attention to non-governmental organisations that have foreign funding sources; we will compare their stated goals with their actual activities and terminate any violations.

Ensuring economic stability and combatting corruption remain among your priority areas. I would like to ask you to pay special attention to cases of misuse and embezzlement of budget funds, including those allocated for the state defence order.

You should cooperate closely with the Accounts Chamber, the Federal Financial Monitoring Service and other oversight agencies. You should be more active in revealing and thwarting shady deals on the Russian stock and currency markets that may lead to sharp exchange rate fluctuations and destabilise the financial system of the entire nation.

Common principles of trade, cooperation and investment are being violated. We see attempts to compromise the business reputation of Russian companies in any way possible. You have to respond to this without delay and competently, within your authority.

Serious tasks are facing the FSB Border Service. The border infrastructure needs to be improved along the entire perimeter of our borders, while traditionally complicated segments in the North Caucasus, Central Asia and the Russian Arctic shelf need to be strengthened.

The Russian-Ukrainian border requires our special attention, of course. The situation there is complicated: thousand of people are trying to escape from the extended armed conflict in southeast Ukraine and are crossing over to Russian territory, sometimes even without their basic documents.

It is important to continue ensuring the unhindered passage of refugees and movement of vehicles with humanitarian cargo. At the same time, we need to reveal those who voluntarily took part in punitive actions against peaceful residents, who are trying to cover their tracks or are planning crimes on the territory of the Russian Federation.

Next. The protection of national information resources should remain under special control. The number of cyberattacks on official websites and information systems of Russian authorities is not diminishing; about 74 million such attacks were curtailed last year alone.

Moreover, over 25,000 internet resources have been identified that carry illegal publications. More than 1,500 extremist websites have been shut down. We must continue efforts to rid the Russian cyberspace of illegal, criminal materials, more actively use modern technologies for this purpose and take part in creating an international information security system.

We are not speaking of limiting online freedom, far from it. We are speaking of ensuring safety, law and order, while strictly complying with appropriate Russian and international norms and standards, without preventing people from communicating online and posting legitimate, valid and correct information.

In the past years, we have done much to improve material and technical support of the Federal Security Service. Salaries, pensions and social benefits for acting and retired personnel have grown significantly.

We have practically resolved the issue of permanent housing. In 2014 alone, 65 designated apartment buildings were commissioned (5,200 apartments). We are simultaneously working to increase the stock of service housing.

The state will continue providing the best service conditions for you, taking care of the families of those who were killed in the line of duty. We will certainly do everything necessary to ensure that all FSB units are equipped with the latest in armaments, technology and special gear.

At the same time, just like all the other agencies, you are facing the task of more rationally using state funding and other resources. You have to show maximum responsibility and concentration in resolving all the tasks facing you.

In conclusion, I would like to wish you success and new, visible results in your service that the country needs so much.

Thank you for your attention. 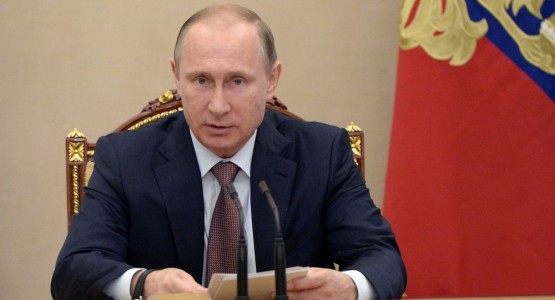 Cameron’s Claim That Russia Was Interested in Brexit Groundless