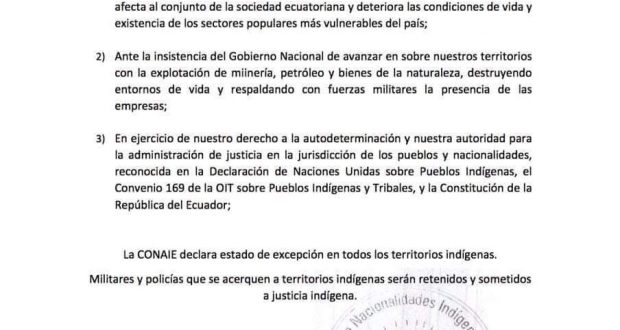 SITREP: Ecuador on the brink of civil war?

Posted by: BalogunAdesina in World News Comments Off on SITREP: Ecuador on the brink of civil war?

by Ruben Bauer Naveira (Brazil) for The Saker Blog
This is a very short summary of an article from Adoración Gusmán (Equatorian), published on Friday, Oct 04th (in Spanish):
https://ctxt.es/es/20191002/
On the evening of Tuesday, Oct 01st, Ecuador’s president Lenin Moreno announced a whole bunch of new legislation, delivering to the people of Ecuador:
– Austerity;– Deep cuts on social rights;– Deep cuts on taxes for the wealthiest;– Dismissal of public workers;– Dismantling of labor relations;– Dismantling of social security; and so on.
On Wednesday, Oct 02nd, people gathered on the cities, and began to march through the capital city, Quito. On the same day, the police and the armed forces started to violently repress the demonstrators.
On Thursday, Oct 03rd, the government decreed the State of Exception, for 60 days.
From then on, the situation has just worsened.
This video is from yesterday, on Monday, Oct. 7th:

And these videos are from today, on Tuesday, Oct. 8th:

Then, there is also this shocking declaration, from the Confederation of Indigenous Nationalities of Ecuador (CONAIE):

From which there follows a translation into English (thanks to Peter Lenny):

CONAIE declares a state of exception in indigenous lands

1) In view of the public authorities’ brutality and their lack of the awareness necessary to understand the popular nature of the demands of the National Stoppage against the Package, which adversely affects Ecuadorean society as a whole and worsens the conditions of life and existence of the country’s most vulnerable popular sectors;

2) In view of the government’s insistence on advancing on our territories to exploit mining, oil and goods of nature, destroying living environments and backing the corporations’ presence with military forces;

3) Exercising our right to self-determination and our authority to administer justice in the jurisdiction of the peoples and nationalities, as recognized in the United Nations Declaration on [the Rights of] Indigenous Peoples, ILO Convention 169 on Indigenous and Tribal Peoples, and the Constitution of the Republic of Ecuador;

The CONAIE hereby declares a state of exception in all indigenous territories.

Military and police who approach indigenous territories will be detained and subject to indigenous justice.

Ecuador has been brought to the brink of civil war.

Previous: Nigerian population is a ‘liability’ – Emir Of Kano, Sanusi
Next: Naija Gist Special: Can of Worms. #sexforgrades