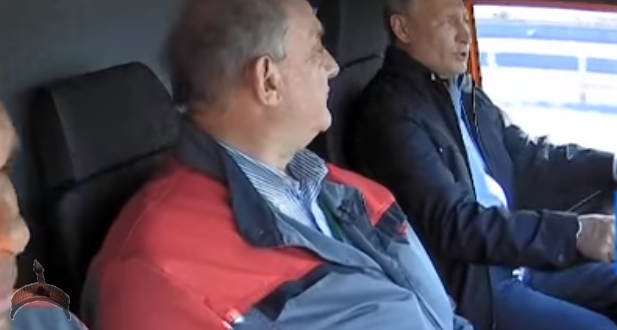 Posted by: BalogunAdesina in World News Comments Off on “Ukraine should blow up Putin’s Crimea bridge” (a lesson in lunacy and hatred)

[Note: Check out what russophobia run amok can do it a person, and I am not even talking to the crackpot who wrote this, but about the folks who published it.  Amazing, no? The Saker ]

Russian President Vladimir Putin opened the Kerch Strait Bridge connecting Crimea, Ukraine, with mainland Russia on Tuesday. Putin did so by in a typical show of bravado by leading a column of transport vehicles across the bridge.

Ukraine should now destroy elements of the bridge.

While that course of action would be an escalation against Putin and one that would almost certainly spark Russian retaliation, this bridge is an outrageous affront to Ukraine’s very credibility as a nation. Of course, from Putin’s perspective that’s the whole point. The bridge cost Russia’s near-bankrupt government billions of dollars, but it offers Putin a formal physical and psychological appropriation of Ukrainian territory.

Fortunately Ukraine has the means to launch air strikes against the bridge in a manner that would render it at least temporarily unusable. Because of its significant length, the Ukrainian air force could strike the bridge while mitigating the risk of casualties by those traversing it.

How would Putin respond?

Probably with escalation against Ukrainian interests in eastern Ukraine. But that escalation is very likely coming in the next few months anyway, and Putin wants to slowly absorb Ukraine rather than conquer it outright (he doesn’t want to upset his soccer World Cup bonanza by inviting new diplomatic pressure). But severing the bridge, even if temporarily, would send an unmistakable signal from Kiev to Moscow that Ukrainians are unwilling to accept the comfortable formalization of Putin’s territorial theft. The Ukrainians could also fly low and circular to evade Russian (admittedly high-competency) air defenses. The U.S. could and should support Ukraine here with confidence in our own military power.

Air strikes would also serve two other objectives: drawing attention to the cronyism behind the project (Putin’s favoritepet oligarch, Arkady Rotenberg, was given the construction contract) and challenging Russian nationalist narrativesin language those nationalists understand. On that latter point, consider that many of the messages below the RT propaganda celebration of the bridge opening reference Putin’s masculinity and the nationalist supremacy of a greater Russia. Bombing the bridge would thus be a very personal rebuke to Putin’s ambitions and his propaganda narrative.

Regardless, the exigent moral urgency of action is obvious. Any state that allows its territory to be stolen and then bound up with the thief has taken a step towards extinction.