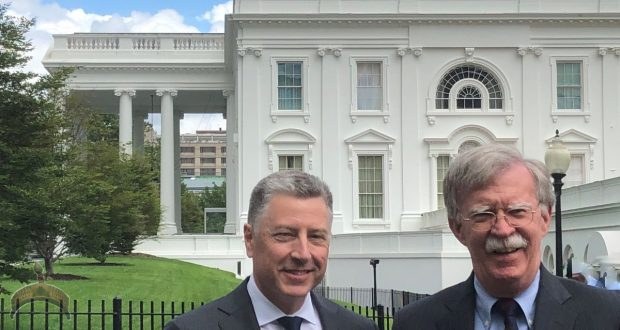 Ukraine will be coerced into making peace in Donbass

Posted by: BalogunAdesina in World News Comments Off on Ukraine will be coerced into making peace in Donbass

Ukraine is important for the US only in the context of their relationship with Russia, and blocks the path to their improvement. The latest statement of the national security adviser to the US President John Bolton became yet more proof of this. On the eve of Putin and Trump’s meeting in Osaka, Kiev ought to prepare for the US playing the Ukrainian card without paying attention to the interests of the Kiev authorities.

Washington tries to defreeze American-Russian relations – but in such a way that it does not look a concession made by the US. Donald Trump is not constrained by the case of “Russian ties” any more, however the Ukrainian crisis remains the main problem for his dialogue with Putin.

It arose during Barack Obama’s reign and is in many respects connected with the objective process of returning to Russia the status of a major world power. The events of 2014 became the most convenient reason for the US to transition to an active phase of “deterring Russia”. The policy of sanctions and attempts to isolate Russia on the world scene not only failed – their results were opposite to American expectations.

Having sustained pressure and not having changed course, Russia strengthened its reputation in the world. Everyone perceives it as the main geopolitical opponent to America’s attempts to hold onto world hegemony.

Trump’s election gave a chance to revise America’s tactics and even strategy. The new president was inclined to reorienting the US from the useless and losing policy of global domination to a policy of strengthening the US via strengthening the economic power of the superpower. The resistance that was shown to Trump by American globalists showed how the fate of the US as a national state is not important for them. But they managed to block the possibility of forming relations between Trump and Putin.

The “Russian case” regularly served this for more than two years. But now Trump received the opportunity to act much more freely. Now, in order to establish cooperation with Putin (and this is necessary for the American president in order to create a new configuration of US foreign policy), Trump “only” needs to deal with the Ukrainian crisis. I.e., remove the Ukrainian stone from the road of American-Russian relations. How can he do this?

Of course, the US is not going to “give” Ukraine back to Russia: the tearing of Ukraine off the Russian world remains the important aim of any American strategist. But the question of the speed and price of this process has principal importance. If the “hawks” consider that Ukraine must be Europeanised and Atlanticised as fast as possible – i.e., included not only in the sphere of influence, but also in the structure of the “western zone of responsibility”, then the “realists” point out that Russia will never agree with the “kidnapping of Ukraine”, and that the haste of the West will only provoke Moscow into solving the problem by force – a campaign to Kiev.

That’s why they consider the neutralisation of Ukraine as the optimum scheme, transferring it into a condition of a no man’s zone, a buffer state that is not used to put pressure on Russia. And after all, it is precisely this that is considered to be favourable by those “hawks” who, without trusting in the possibility of the Atlanticisation of Ukraine, support its use as a constant irritant against Moscow.

Such a neutral Ukraine would be more in the zone of influence of the West than in Russia’s. And although everyone understands that it is a temporary and suspended option, for the US it would be an undoubted success (even to suspend the situation for 20-30 years – it is all the same to deprive Russia of its historical cradle, to stop the reintegration of the Russian world, the Russian revanche). And the most important thing – this option would remove the Ukrainian topic from the agenda of relations between the US and Russia, allowing the US to count on searching for mutual understanding with Moscow in other international problems.

How to achieve this? To portray peace and progress in the Ukrainian settlement. Because in reality it is currently impossible to solve the Ukrainian crisis.

Implementing the Minsk Agreements, i.e., to return Donbass to the structure of Ukraine, is impossible as long as the Ukrainian elite continues to not realise that the road to Europe is closed and does not start to restore relations with Russia. This is a process for the next decade. And even in the event of its acceleration, returning Donbass to Ukraine is possible only after a full turn of Kiev towards Moscow and the inclusion of Ukraine in the structure of the Eurasian Union.

That’s why all that’s left to do is to give the illusion that there is a settlement process. Kiev will opt to really stop firefights on the border and to withdraw troops under the pressure of the West; to really adopt laws on amnesty in Ukraine as one more point of the implementation of the Agreements. And the most important thing – to really do it so that the topic of repulsing “Russian aggression”, as well as the topic of “returning Donbass”, in fact, leaves Ukrainian domestic politics, remaining a prerogative of the opposition.

Zelensky’s election is a step in precisely this direction. The cynical and cunning Ukrainian elite best of all understands that there won’t be any return. And all the game of Poroshenko on the topic “Ukraine is an outpost of the West in deterring Russian Aggression” was built on the conviction that the West waits for precisely this from Ukraine.

But the matter is that the West hasn’t wanted anything as such from Kiev for a long time. Europe very much groans from the need to play the “Ukrainian game”, which prevents it from doing business with Russia. And the US under Trump also does not want to raise the stakes in the “Ukrainian game”, or to in general pay much attention to it. The West needs Ukraine to know its place, i.e., to become imperceptible and silent, giving the illusion of a “road to peace”; to not get in the way of the big boys; to not go back to Russia, but also to not sit at the table with the real players.

It is precisely for this reason that Kiev will be shown its place. This will happen during the next month when Zelensky will go to see Trump in Washington. It will be done tenderly, but insistently: through coercion to negotiations with Russia and with Donbass, to reduce aggressive rhetoric (it has already subsided). But the most important thing – through an explanation of the expectations: “progress in the peace process”, allowing the US to remove the Ukrainian topic to a place more fitting for it – a place that does not prevent the establishment of American-Russian dialogue.

As a matter of fact, the national security adviser to the US President John Bolton wrote about precisely this on Thursday:

“[US] Ambassador [Kurt] Volker and I met today to discuss Ukraine negotiations and agreed that President Zelensky’s election creates new opportunity to push for peace in Donbass – a key step to improving US-Russia relations – but it’s critical that Russia do its part and engage seriously”.

Peace in Donbass is a key step for the improvement of relations between the US and Russia. Simply put, they want to hear from Ukraine that its relations with Donbass are if not very good, then they at least gradually improve. And there is no doubt that they will hear this – Kiev has nowhere to disappear to, simply.

Previous: US planning ‘tactical assault’ on Iran in response to ‘tanker attack’ — report
Next: The curious case of the tankers in the Gulf of Oman