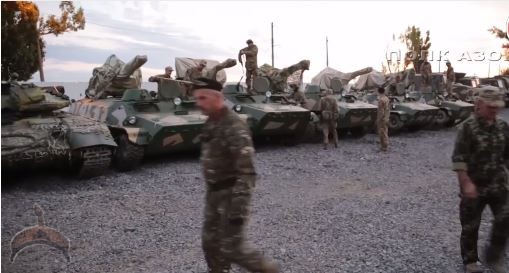 Ukrainian Military After 5 Years Of Warfare

Posted by: BalogunAdesina in World News Comments Off on Ukrainian Military After 5 Years Of Warfare

Prior to the Maidan coup of 2014, Ukraine’s military existed in a political vacuum, suffering from benign neglect as well as corruption and other problems plaguing the Ukrainian state. Apart from downsizing, which meant the replacement of divisions by brigades, no modernization was conducted in the years of independence. While Ukraine did contribute to a variety of international missions, even sending a small contingent to Afghanistan and Iraq, these units came from various elite components of the armed forces. The rank-and-file mechanized and armored brigades simply languished under successive Ukrainian governments.

Kiev’s bid to mobilize its military resources after 2014 has enjoyed mixed fortunes. On the one hand, Ukraine did benefit from massive stockpiles of relatively modern weapons left over from the Soviet era. They gave a seemingly inexhaustible supply of weapons and spare parts to flesh out existing units and assemble new ones. In practice, however, neglect of the stored equipment and the limited capacities of Ukraine’s manufacturing and repair infrastructure meant that the losses incurred during the battles of 2014 and 2015 could only partly be replaced, and even then only with inferior equipment. While Ukraine does have the ability to manufacture heavy and light armored vehicles, it cannot do so in large quantities or without continued supply of certain subsystems from Russia. Indigenously developed vehicles like the Oplot MBT or BTR-3 and -4 APCs seem mainly intended for export to earn badly needed hard currency. Domestic modifications of existing vehicles like the T-64BU Bulat MBT have been discontinued due to the combination of high costs and enduring problems. So as a result of five years of intermittent warfare Ukraine’s tank and APC fleets are smaller, older, more heterogeneous, and more worn out than they were at the beginning of conflict. The shortage of heavy equipment has forced Kiev to resort to organizing motorized brigades with hardly any armored vehicles at all.

NATO’s contribution has not reversed this trend. There is no evidence any MBTs have been supplied to Ukraine, even from former Warsaw Pact members of NATO who, like Poland and the Czech Republic, have limited themselves to deliveries of small numbers of 2S1 howitzers and BMP-1 troop carriers. Western NATO members likewise have not been showering Ukraine with modern equipment. The most notable deliveries of Western gear were the AT-105 Saxon 4×4 APCs from Great Britain, and the Javelin ATGMs from the United States, the latter of which have not seen combat and appear to be held in reserve. There have been spotty deliveries of small arms, including US copies of RPG-7s, large caliber sniper rifles, Humvees, and even US-made counter-battery radars. The most important aspect of foreign aid has been in the realm of provision of munitions, both for small arms and artillery. The provision of large quantities of artillery shells enabled Ukraine to subject the Donbass to continued bombardment for the last five years. Here the culprits are, again, the former Warsaw Pact members of NATO, with the deliveries being paid for by US military assistance to Ukraine funds.

The fact that the Ukrainian state has de-facto lost its monopoly on violence after the events of 2014 also left a mark on Ukraine’s forces. The military has a powerful competitor in the form of the National Guard which comprises some of the most ideological neo-Nazi elements in Ukraine, and which amounts to a state within a state under the command of Arsen Avakov. The fact that Avakov is one of the few high-level luminaries from the Poroshenko era to survive into the Zelensky era proves something that has long been suspected, namely that he is an independent player in Ukrainian politics whose subordination to the President is only nominal. Little is known of Avakov’s ties to the West, though here the fact that Western powers have turned a blind eye to Avakov’s arming of neo-Nazis suggests they view him as an insurance policy against Zelensky or any future Ukrainian leader who might “go soft” on Russia. Avakov and his proxies have made it clear on more than one occasion that he would oppose “revanchism” in the form of improved relations with Russia, which makes his political preferences consistent with those of Western hardliners. Zelensky’s humiliating confrontation with Azov Regiment militants, who plainly refused to accept orders from their supposed commander-in-chief, only underscores the weakness of his position. It also means that should Ukraine’s military suffer disproportionately heavy combat losses, it would create a vacuum of power that Avakov’s National Guard would be eager to fill.

For that reason, the seven brigades of the Airmobile Forces, the elite of the Ukrainian military have seen relatively little fighting in the Donbass. These brigades were built on the basis of Ukraine’s Airborne Forces units, with adaptations to modern warfare including provision of heavy equipment such as T-80BV tanks, BTR-3 and -4 wheeled infantry fighting vehicles replacing the Soviet-era BMDs, and of course self-propelled artillery battalions. They also contain a considerably higher proportion of contract as opposed to conscript soldiers, are without any doubt the most effective units that Kiev commands. They are also quite visible during parades and exercises attended by Western observers. But instead of being on the front lines, two of the seven brigades are stationed close to Kiev, while the rest are spread relatively evenly across Ukraine’s regions, even Western ones where there is little danger of fighting, suggesting their role is mainly internal security. While their ostensible military purpose is to serve in a “fire brigade” role in the event of an LPR/DPR breakout and possibly even a direct Russian intervention, the fact that only one of the seven brigades is anywhere near the Donbass at any one time suggests that their main task is to guard against the potential seizure of power by the National Guard or other militants.

The political divisions, corruption, and progressive impoverishment of Ukraine have also left an impact on the armed forces. In order to send Ukrainian brigades to the Donbass to suppress what at that point were peaceful demonstrations, Maidan leaders had to resort to a major purge of the command staff, elevating relatively junior officers with proven nationalist credentials in order to ensure the military would follow orders. The early cases of units refusing to act against the Donbass activists showed that the pre-Maidan military was not mentally ready to shoot at Ukraine’s own citizens.

The problem of motivation has persisted ever since. Far from every Ukrainian citizen shares Kiev’s political preferences or is interested in shedding blood on behalf of the oligarchs. Those Ukrainians who do serve often do it because military salaries actually compare favorably to what is available in the depressed Ukrainian economy, not to mention the prospect of plunder and/or smuggling in the frontline areas, with the latter being responsible for several clashes among various Ukrainian formations seeking to control this or that smuggling route.  But since the soldiers’ motives tend in the direction of monetary gains, the morale among those frontline Ukrainian units actually on the “line of separation” remains low, with a high rate of non-combat casualties caused by alcohol abuse or careless handling of weapons. To offset this, Ukrainian commanders appear to have resorted to forming specialized assault units that can be relied upon to undertake difficult missions. The clashes along the line of separation during which Ukrainian forces attempted to seize positions in the “no-man’s land” separating the warring parties were carried out by such assault units usually of company strength. These clashes also showed the strengths and weaknesses of these formations. While capable of launching bold attacks, they are also highly vulnerable to attrition which ultimately forced them to abandon positions they had seized.

Consequently the Ukrainian military can roughly be broken down into three tiers. At the top there are the well-equipped and trained airmobile brigades intended for use as a last resort should a crisis erupt either on the front lines or on the home front. At the bottom there is the grey, unremarkable mass of poorly motivated Ukrainian conscripts serving in poorly equipped and trained mechanized and motorized brigades who perhaps can be relied upon to hold positions on quiet sectors but likely not much else. And in between there are the select assault units among these brigades, as well as volunteer battalions of the National Guard, which can carry out spectacular localized raids but which are unsuitable for sustained warfare.

There is little chance that the situation will change in the foreseeable future. Ukraine cannot afford a professional, all-volunteer force large enough to meet its requirements.  It also cannot afford modern weapons in large quantities. The “praetorian” factor gave Kiev an incentive to concentrate its contract soldiers and best weapons in the elite rapid reaction airmobile brigades, instead of using them in leadership positions among the ordinary mechanized and motorized brigades. While this means a rather dysfunctional military of radically differing capabilities, it is adequate to Kiev’s perception of threat. The “fire brigades” could probably handle a breakout threat by LPR/DPR forces. The Russian military is unlikely to involve itself in force except in cases of dire danger to LPR/DPR posed by a major Ukrainian offensive which Kiev so far has been unwilling to launch for fear of a new round of heavy personnel and material losses. Last but not least, Kiev appears to be aware that the outcome of the Donbass crisis has more to do with Moscow and Washington than with Kiev’s military modernization efforts.