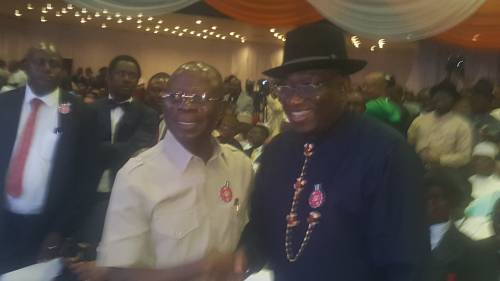 There was a drama at the ongoing book launch and 61st birthday anniversary of the former President Goodluck Jonathan as former President Olusegun Obasanjo and Chairman of the All Progressives Congress (APC ), Adams Oshiomole, made a surprise appearance at the event. 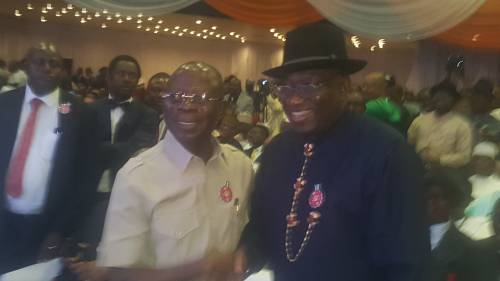 The event is taking place at the Congress Hall of Transcorp Hilton Hotel Abuja.

Obasanjo arrived at the hall at about 2:00pm, with the crowd hailing in deafening shouts of “Baba, Baba, Baba”. Oshiomole, who also walked in few minutes after Obasanjo, went straight to the celebrant, Goodluck Jonathan, and exchanged greetings with him while people were shouting “Osho Baba, Osho Baba, Osho Baba”. 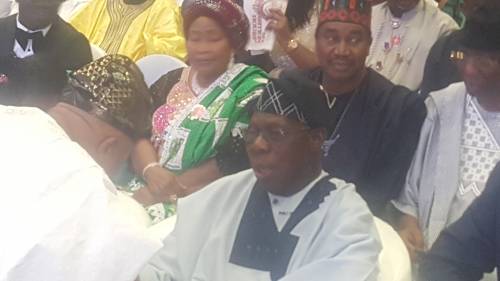 While the drama was ongoing, former Governor of Akwa Ibom State, Senator Godswill Akpabio, who defected from Jonathan’s Peoples Democratic Party (PDP) to the All progressives Congress (APC), also entered.

The event was temporarily put on hold for few minutes while the drama was going on.

Many dignitaries have stormed the Congress Hall, Transcorp Hilton  Hotel Abuja for the official launching of ” My Transition Hours” a book written by former Nigerian President H.E Dr Goodluck Ebele Jonathan GCFR as well as marking of his 61stbirthday anniversary.

Fani Kayode and his girlfriend Precious are already at the venue