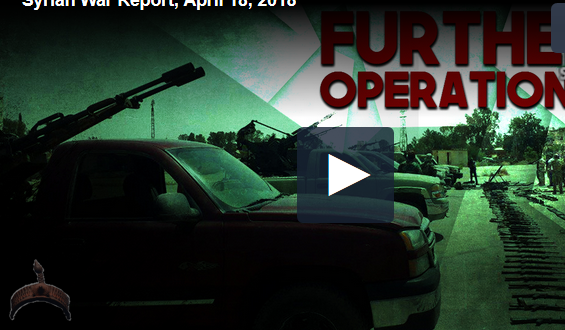 After the victory in Eastern Ghouta, the Syrian military turned its eyes to other militant-held pockets across the country.

On April 15, the Syrian Army and the National Defense Forces launched a military operation against Hayat Tahrir al-Sham (formerly Jabhat al-Nusra) in the Rastan pocket in northern Homs. They have have liberated a large number of points including Jarjisah, Ard Jasiyah, Ard Qabr Shaykhah, Zahrat Jibab and Tal Na’ourah.

By April 18, the militants had re-grouped and launched a counter-attack on Jarjisah. Clashes are ongoing there.

A reconciliation agreement has been reached in the town of Al-Dumayr in Eastern Qalamoun. On April 17, militants there started surrendering their heavy and medium weapons. About 1,000 militants and their associates are set to withdraw from the area. The rest will settle their legal status.

In southern Damascus, the military is preparing for a military operation against ISIS in the Yarmouk camp area. Major reinforcements have already been deployed for this advance. However, the operation may be delayed if the situation in the Rastan pocket turns out to be complicated and the militants’ advance there gains momentum.

On April 17, OPCW inspectors entered the town of Douma to probe the alleged April 7 chemical attack. The US-led block accuses the Syrian government of being behind it. Russia and Syria say that the attack was staged.

Saudi Arabia is open to sending troops to Syria under the US-led coalition if such a decision is taken, Foreign Minister Adel al-Jubeir said on April 17 adding that his country has been in discussion with the US on the issue “since the beginning of the Syrian crisis”.

Earlier a Wall Street Journa report claimed that the Trump administration is seeking to establish some “Arab force” that would replace US troops in northern Syria. This “Arab force” reportedly could be established with the support of Saudi Arabia and some other Gulf states.

The problem is that Saudi Arabia is currently involved in a long and complicated military conflict in Yemen. The Saudi-led coalition intervened in the country in 2015 in order to defeat the Houthis and to establish a puppet government there. However, since then, the Saudi-led coalition has not been able to achieve its main military or political goals. Its forces have not been able to capture the Yemeni capital. At the same time, the Houthis have increased cross-border attacks against and missile launches at Saudi Arabia.

Moe details and versions have appeared about the alleged April 17 missile attack on Shayrat and Dumair military airfields. According to a new version originating from some military sources, surface-to-air missile launches by the Syrian Air Defense Forces (SADF) were triggered by a false alarm and no attack actually took place.

The Syrian military made no official statement on the issue, but the state-run media also circulated this version referring to a military source. The initial claims by the Syrian state-run media and other sources about a repelled attack could be viewed as an example of propaganda in this conflict.

The version most popular in the MSM is that the April 17 incident was triggered by combined US-Israeli electronic or cyber warfare attack.