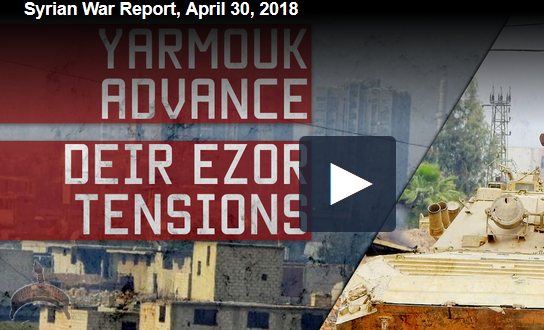 Syrian government forces have liberated the districts of al-Ma’dhaniyah, al-Asali, al-Qadam and al-Jourah in the southern countryside of Damascus from ISIS. Government troops captured all these areas after air and artillery strikes had destroyed all the ISIS defense there.

The ISIS-linked news agency Amaq claimed that 16 Syrian Army (SAA) troops had been killed in the recent clashes.

According to pro-opposition sources, members of Jaish al-Islam, Hayat Tahrir al-Sham (HTS) and Jaish al-Abadali operating in the eastern part of the southern Damascus pocket have agreed on an evacuation deal that is set to be implemented on May 1.

On April 29, members of the SAA and local tribal forces entered the villages of Junaynah, Jiyah, Shaqrah and Hoyqat Ma’esha, which had been controlled by the US-backed Syrian Democratic Forces (SDF).

Later on the same day, SDF units, backed up by the US-led coalition, recaptured all the villages that they had lost on the eastern bank of the Euphrates.

According to pro-government sources, 8 SDF members, including a senior Arab commander Ahmad al-Jifil, were killed in the incident. Pro-Kurdish sources claimed that 12 SAA members had been killed.

Some sources also claimed that members of the Iranian-backed Baqir Brigade had participated in the operation. On April 6, the Baqir Brigade vowed to fight the US-led coalition and its proxies controlling eastern Syria.

According to pro-government sources, the April 29 incident was caused by the willingness of the local Arab tribes to retake their villages controlled by the Kurdish-dominated SDF.

On April 28, ISIS attacked SAA positions in the villages of Ashayir, Sukkariyah and al-Hiri in the province of Deir Ezzor. The attack was a response to an anti-ISIS security operation launched by the SAA in the area in late March.