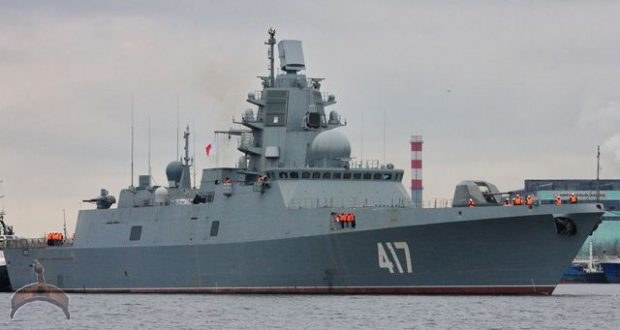 Posted by: BalogunAdesina in World News Comments Off on Russia Successfully Test-launches Zircon Hypersonic Missile From A Warship

The newest Russian hypersonic cruise missile – the ZIrcon was test-launched from a warship for the first time, TASS reported.
The Project 22350 frigate Admiral Gorshkov shot the Zircon from the Barents Sea aimed at a ground target at a military training ground back in January.
This was reported by two anonymous sources in the authorities of the North-West Federal District.

“In accordance with the Zircon state testing program, in early January of this year, Admiral Gorshkov test-launched this missile from the Barents Sea aimed at a ground target at one of the military training grounds in the Northern Urals,” said one of the sources.

Another source confirmed this information, noting that the “Zircon flight range exceeded 500 km.”
The source also said that tests of Zircon from surface carriers will continue throughout 2020.

“After the completion of the test launch program from the Admiral Gorshkov, these missiles will be launched from nuclear submarines,” the source said.

In November 2019, the Northern Fleet press service reported that the frigate Admiral Gorshkov had arrived at the Belomorsk Naval Base (Severodvinsk) in preparation for testing new types of weapons.
The successful test shows that the new hypersonic missile, the Zircon can be equipped on surface ships, and also potentially on submarines in the future.
Progress is being made along all of the hypersonic weapons, since equipping the Kinzhal hypersonic missile on aircraft is also going along according to plan.
The commander of the troops of the Central Military District Aleksandr Lapin said that by the 2024, the MiG-31K fighter jets of the the Kansky regiment in the Krasnoyarsk Territory would be equipped with the Kinzhal hypersonic missile.
Zircon has a speed of about 9 Machs and can hit targets at sea and on land at a distance of more than 1,000 kilometers.
The latest hypersonic missiles will be used from serial surface ships and submarines, including those capable of carrying Kalibr missiles.
russia Russian Weapons 2020-02-27
BalogunAdesina