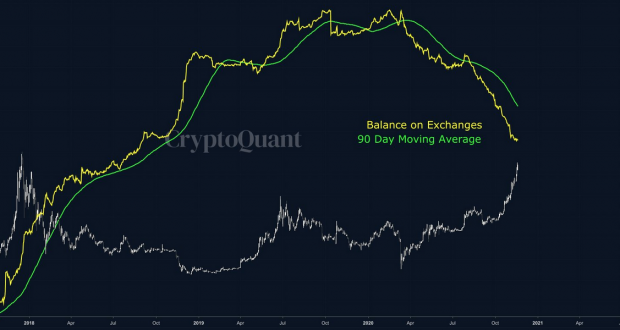 Pls take note: Bitcoin’s purpose has nothing to do with governments, political parties, elections. It is supported by a code without owner and institutions, something free and pure. In addition to being untouchable and intangible, its value goes far beyond what we have already seen. It is a revolutionary idea, liberation, an idea that gives you real control of what is yours.

The government can steal oil, gold other natural resources from other countries via war and installing a puppet regime loyal to them… They cannot steal your BTC except you give them ur private key… How many private keys will they steal?

This phenomenon will be shocking. Look at that liquidity on exchanges during the previous runup and the whole bear market. It’s vanishing. Hodl fomo is a far stronger force for scarcity than the halving. It will be shocking.

As opposed to speculative FOMO, the adoption of bitcoin as a reserve asset is an intentional decision to hold it for the long term, aka HODL. While we saw speculative FOMO during the last bull run, during this run we are seeing the beginnings of HODL FOMO.

Widespread HODL FOMO begins with widespread trust in bitcoin. Bitcoin has been significantly derisked in the past few years. The fork wars ended in a decisive win for bitcoin. Major corporations such as Square, Visa, IBM, and Fidelity are investing in Bitcoin projects.

The US Office of the Comptroller of the Currency (OCC) declared national banks can legally custody Bitcoin. U.S. Congressman Patrick McHenry said last year that “the world that Satoshi Nakamoto, author of the Bitcoin white paper, envisioned is an unstoppable force.”

Paul Tudor Jones, when investing almost 2% of his fund’s assets into Bitcoin, said, “every day that goes by that Bitcoin survives, the trust in it will go up.” The Bitcoin network has run with 99.98% uptime for almost 12 years and has never been compromised.

And, perhaps most important to kicking off the HODL FOMO, @michael_saylor shocked the bitcoin world this year by moving his public company, @MicroStrategy, onto a corporate Bitcoin standard by acquiring 38,250 BTC for the corporate treasury.

That move was soon confirmed as trendsetting by the acquisition of $50M worth of Bitcoin by @Square as a corporate reserve asset. Trust in bitcoin is spreading quickly. Bitcoin is no longer an Internet curiosity. It has emerged as a major player on the world stage.

In 2017 speculators were chasing one another in a game of cat and mouse. The vast majority of those involved were denominating their gains in fiat. When the game came to an end these speculators fled back to their unit of account.

There will be no such mass flee in this cycle of HODL FOMO. The speculation has moved from short term fiat gains to the prevention of long term fiat loss: a fundamentally different kind of speculation that requires holding the speculative asset for the long term.

HODL FOMO will not lead to the bursting of a short term speculative bubble. Instead, it will steadily build a rising foundation for the Bitcoin price, block by massive block, as the phenomenon proceeds to add new long term Bitcoin hodlers to the network.

The HODL FOMO cycle will not end. The fundamental shift of bitcoin as a short term fiat-denominated speculation into a long term fiat-hedge speculation is the fuel that will achieve bitcoin’s escape velocity from fiat’s gravity.

Previous: The Ugliest Man In The World Weds Third Love – Photos
Next: ‘We will never concede’! Trump doubles down on fraud claims after GSA green-lights power transfer, says lawsuits moving ahead