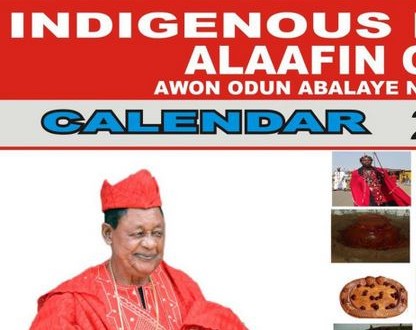 Posted by: admin in Breaking News, Religion Comments Off on Yoruba Festivals Calendar 2016 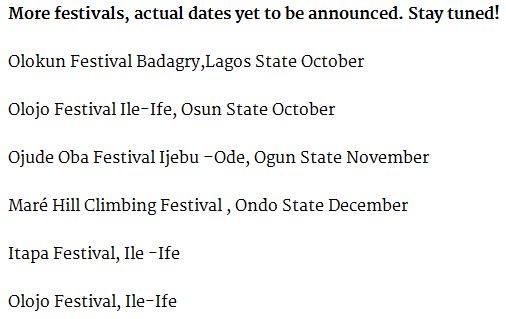 These festivals feature lots of entertainment which include traditional musicians with heavy rhythm and their traditional instrument, drums, and advanced percussion, various traditional Yoruba cultural dance, etc. Below are the popular Yoruba festivals that are celebrated every year in Nigeria.

1. Eyo Festival Eyo Festival is a popular Yoruba festival peculiar to Lagos state. “Eyo” is the name of the costumed dancers that come out during the festival. These costumed dancers are popularly called masquerades. The festival back in the early days started as a festival to escort the spirit of a dead Lagos king or high chief and to usher in the new king or chief. Although most of the Yoruba traditional religions have lost a majority of their followers to Christianity and Islam, the Eyo festival is still celebrated today as a tourist attraction. The festival in modern times now takes place on Lagos Island in Lagos State, Nigeria. The festival generates revenue for small businesses around Lagos Island and also the Lagos State government.

The Igogo Festival is a Yoruba festival which takes place every year in Owo, Ondo State, Nigeria. The festival is held in honour of Queen Orosen, a goddess and a mythical wife of ancient Oluwo of Iwo, Olowo Rerengejen. The festival takes place every year in the month of September and lasts for seventeen days. During the festival celebration, the king of Owo and the high chiefs all dress like women wearing beaded gowns, coral beads, head gears and caps with their hair plaited. The Igogo Festival is also a time for the celebration of new yams.

4. Ojude Oba Festival Ojude Oba is another popular Yoruba annual festival in Ijebu Ode, a Yoruba town in Ogun State, Nigeria. The festival always holds on the third day after Eid al-Kabir. Ojude Oba Festival is a festival that showcases history, legends, conquest, and diversity all in one event. During the festival, a majority of indigenes of jebu Ode travel from far and near to pay homage to their king. More than two hundred and fifty thousand people from all over the six geopolitical zones of Nigeria attends the festival every year.

5. Olojo festival Olojo Festival is an annual popular festival in Ile-Ife town in Osun State. The festival is a celebration of Ogun the god of Iron. Yoruba people believe that Ogun is the first son of Oduduwa. Oduduwa is believed to be the progenitor of the Yoruba race. Olojo festival day which can be literally translated as the “Owner of the day”, signifies the day of the year that the Olodumare (i.e. creator of the universe) has specially blessed. The Ooni, the king of Ile-Ife appears in public on this day with the Are Crown (i.e. King’s Crown) after several days of being in seclusion. On this day, the Ooni will visit different shrines to offer prayers for the peace in the Yoruba lands and in Nigeria. Ile-Ife is seen as the source or origin of the Yoruba race. And so, this festival is held in high esteem as a festival for the unification of the Yorubas.

6. Osun-Osogbo Festival Osun-Osogbo Festival is an annual festival celebrated in Osogbo, Osun State in honour of Osun, a river goddess and an important deity in Yoruba land. The festival takes place at the Osun-Osogbo Sacred Grove, a sacred forest and a UNESCO World Heritage Site since 2005. The festival holds in the month of August for two weeks. The people of Osogbo see the month of August as the month of celebration, traditional cleansing of the city, and a cultural reunion with their ancestors. The festival celebration includes activities like “Iwopopo” which is the traditional cleansing of Osogbo town, three days lightening of the “Ina Olojumerindinlogun” which is a five hundred years sixteen-point lamp, and the ‘Ibroriade’ which is the assembling of all the crowns of all the past kings of Osogbo. The Osun-Osogbo festival celebration is led by the sitting king of Osogbo, a chosen chaste lady known as the Arugba, the Yeye Osun, and a committee of Priestesses. The annual celebration of the Osun-Osogbo festival attracts thousands of Osun Worshipers, tourists, and spectators from around world.

8. Sango Festival Sango Festival is a Yoruba festival which holds every year in honour of Sango, the god of thunder and fire. Sango was the third king of the ancient Oyo Kingdom and a warlord. It is believed that the boundaries of the present-day Oyo State were founded by Sango. The festival was re-branded and renamed as World Sango festival by Oyo State government in 2013. The festival takes place every year in the month of August at the palace of the Alaafin of Oyo’s palace. The festival runs for a week and it attracts more than twenty thousand spectators from around the world. Most especially from Brazil, the Caribbean, Cuba, and Trinidad and Tobago. The world Sango Festival is recognized by UNESCO as a cultural and tourism event of thousands of Yorubas living in diaspora and other tourists visit Oyo State yearly for the celebration of the festival. The festival is also celebrated in more than forty countries all over the world.