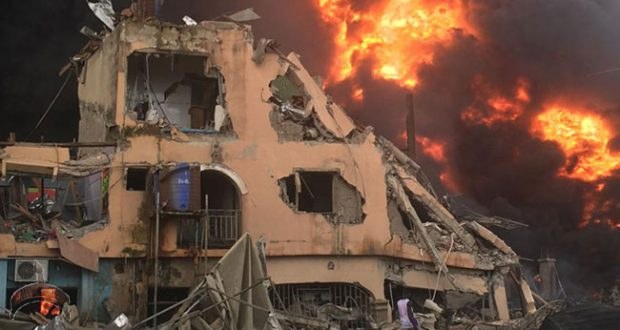 In a statement by the Group General Manager, Public Affairs Division, Dr Kennie Obateru, on Sunday, the blast occurred after a truck hit some gas cylinders stacked in a gas processing plant located near the corporation’s System 2B pipeline right of way.

He added that preliminary findings indicated that the impact of the explosion was huge that it led to the collapse of nearby houses and damaged some NNPC pipelines.

Dr Obateru said when the corporation heard about the explosion, it halted ongoing pumping operation on the Atlas Cove-Mosimi pipeline which was active at the time of the incident, while efforts are being made to curtail the fire.

The NNPC spokesman appealed to members of the public and residents of the affected communities to remain calm and assured that the temporary shutdown of the petroleum products pipeline would not affect the normal supply of products to Lagos and its environs.

Previous: Video: When Goalkeepers Save Penalty Kicks In Unusual Ways!
Next: Video: Before Massive Explosion At Abule Ado/ Festac Town