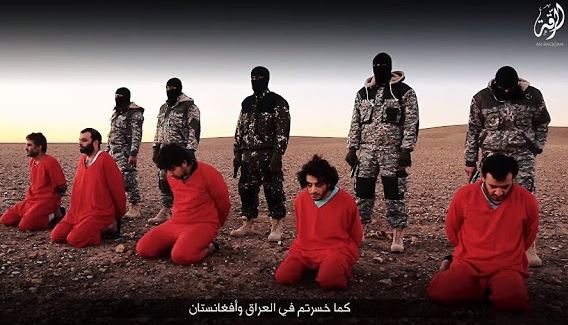 The Daesh terrorist bunch released another video, in which a representative of the sect threatened Britain and the nation’s Prime Minister David Cameron with invasion.

The Daesh radical gathering droped another video, in which a covered man with a British accent threatens Britain and its Prime Minister David Cameron and militants purportedly execute five purported British spies.

It is vague if the executions in the video are credible. Daesh for the most part tries organizing realistic executions, however the new video has broad editing in its execution portion. One man, who falls back in the wake of being shot in the back of the head is later shown lying face-down. While falling back, what seems by all accounts, to be blood is poured on his shirt from outside the shot in a pattern not taking after his movements.

The man does not have all the earmarks of being Jihadi John, prior said to be murdered by a US drone strike. The five men implied to be British spies only speaks in Arabic in the video. The sect already dropped a video and a sung lyric (nasheed), in which it correspondingly threatened Russia and President Vladimir Putin with invasion.

The man in the video likewise called David Cameron an “imbecile” and a “slave of the White House.” Daesh allegedly expanded creation of propaganda recordings in the wake of losing the town of Ramadi to the Iraqi armed force and civilian armies.

The man implied to be “British spies” could be those working for the inernational coalition photographs and photos from Raqqa, security analyst Charlie Winter told the Independent.