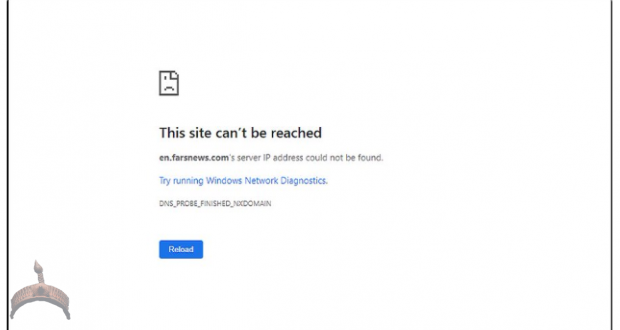 Posted by: BalogunAdesina in World News Comments Off on Iran’s Fars News Knocked Off Web By Us Treasury Order

Iran’s well-known state media outlet Fars News Agency says US sanctions have knocked it off the internet. As of Friday and into early Saturday the en.farsnews.com domain remained inaccessible while the outlet says it quickly alternately established English content on https://en.farsnews.ir/, which remains live.

Iran says the US Treasury Department shut down international access to its English news site due to new regulations related to US sanctions.

It’s not the first time state-linked Iranian media outlets have had access to Western audiences blocked, with PressTV complaining in recent months about being blocked on YouTube and other popular social media sites; however it’s less common for their domains to be blocked.

Fars outlet issued a Farsi language tweet Friday which reads according to a translation:

“From an hour ago, audience access to the Fars News Agency site has encountered a problem due to being placed on America’s sanctions list, and the technical part of [this] News Agency is working to create access for the audience on the farsnews.ir domain.”

It further said administrators of its state-controlled site were notified Friday that it was being shut down after the US Treasury Department ordered the drastic action it due to sanctions violations.

Fars has since erected a separate domain for its now blocked English language site.

The news agency said that it had received an email from the server company, which explicitly said that the blockage is due to an order by the Treasury’s Office of Foreign Assets Control (OFAC) and its inclusion in the list of Specially Designated Nationals (SDN).

The agency attached to its post a screenshot of its website with the message “www.farsnews.com’s server IP address could not be found.”

In the wake of the Jan.8 Iranian ballistic missile attack on Ayn al-Asad airbase in Iraq, Iranian media outlets were slammed by western analysts for “spreading disinformation” — which initially included claims of multiple American troop deaths and a totally obliterated base.

But in reality both sides could be blamed for sowing war propaganda and disinformation, given the US side initially said “no casualties” — later revised to 11 traumatic brain injuries, and days ago dramatically updated to 34 total head injuries.

Previous: Àse Ifá
Next: SITREP: Iraq’s million-man march against US occupation, and Pentagon admits to 34 injuries from Iran strike