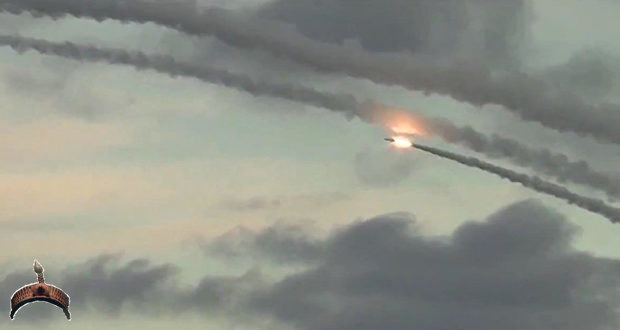 Posted by: BalogunAdesina in Breaking News, World News Comments Off on Kalibr cruise missiles strikes on ISIS targets in Syria by the Russian Navy

On June 23, Russian Ministry of Defense reported missile strikes against the IS (Islamic State) in Syria

The official statement in Russian.

The missiles were launched from Russian Navy frigates, the Admiral Essen and the Admiral Grigorovich, as well as a submarine, the Krasnodar, from the eastern Mediterranean, the Defense Ministry said in a Friday statement. The submarine fired its missiles while submerged.

The strikes targeted Islamic State (IS, formerly ISIS/ISIL) command and control centers, as well as ammunition depots in the Syrian province of Hama.

Today’s precision strike hit a large IS ammunition depot near the town of Aqerbat, which detonated after receiving a direct hit, the Defense Ministry statement noted.

The remaining targets were destroyed in subsequent airstrikes, the ministry said. Russia warned Turkey and Israel about the attacks via military-to-military hotlines.

According to the Defense Ministry, “[the ships] targeted an area east of Palmyra, where the militants’ heavy weaponry and manpower were located. The militants had moved there from Raqqa. All targets were destroyed.”

Bulletin of the Russian Defence Ministry on implementation of the Memorandum on creation of de-escalation zones (June 23, 2017)

Control groups continue monitoring the ceasefire observation within the implementation of the Memorandum on creation of the de-escalation zones in the Syrian Arab Republic, which had been signed by the Russia, Turkey, and Iran on May 4, 2017.

Situation in the de-escalation zones is assessed as stable.

Within last 24 hours, the Russian party of the Russia-Turkey Commission on violations of the Joint Agreement has registered 13 cases of firing in the provinces of Aleppo (2), Hama (1), Damascus (5) and Latakia (5).

The Turkish party has registered 12 cases of ceasefire violations in the provinces of Daraa (4), Hama (1), Homs (1) and Damascus (6).

Most cases of unselective firing from small arms have been registered in the areas controlled by insurgents of the ISIS and Jabhat al-Nusra terrorist groupings.

Within last 24 hours, the Russian Centre for reconciliation of opposing sides held 3 humanitarian actions in the city of Aleppo, civilians received 3.6 tons of drinking water.

Within last 24 hours, 11 ceasefire agreements have been signed with representatives of inhabited areas in the Syrian Arab Republic.

The number of people living in the inhabited areas which signed the agreement – more than 34,000.

Total number of inhabited areas, the leaders of which had signed reconciliation agreements is 1,828.

Negotiations on joining ceasefire regime have been continued with field commanders of detachments of armed opposition in the Aleppo, Damascus, Homs, Hama, Homs, Idlib and al-Quneitra provinces.

The number of armed formations, which had claimed to observe the ceasefire regime, is 223.