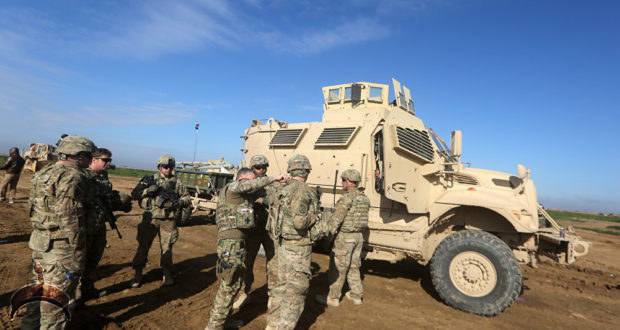 ‘Moderate’ Rebels Force US Commandos to Run From Syrian Town

Posted by: BalogunAdesina in World News Comments Off on ‘Moderate’ Rebels Force US Commandos to Run From Syrian Town

As the United States has consistently backed what Washington identifies as “moderate” rebels in the Syrian conflict, video released Friday appears showing the same moderate fighters turning on American Special Forces.  On Friday, the Pentagon announced that a large number of US Special Operations Forces have been deployed to Syria to fight alongside the Turkish military and so-called moderate Syrian rebels.

“At the request of the government of Turkey, US special operations forces are accompanying Turkish and vetted Syrian opposition forces as they continue to clear territory from ISIL [Daesh] in and around the area of the Syrian border near Jarabulus and Ar Rai,” Pentagon spokesman Jeff Davis told reporters.

These joint ops appear to be off to a rocky start.

Footage appears to show US commandos being chased from the town of Ar Rai by fighters of the Free Syrian Army (FSA).

“Christians and Americans have no place among us,” one fighter shouts. “They want to wage war to occupy Syria.”

“The collaborators of America are dogs and pigs,” shouts another. “They wage a crusader war against Syria and Islam.”

According to Charles Lister, a senior fellow with the Middle East Institute, the incident revolved around the FSA’s fears that the US was now supporting the Kurdish People’s Protection Units (YPG).

“Heated tempers and YPG relations aside, this was a big mistake by FSA. But it does go to show the diplomacy now required to make it work,” Lister told the Telegraph.

On September 9, Russian Foreign Minister Sergei Lavrov and US Secretary of State John Kerry announced a new peace plan to address the five-year civil war in Syria, calling for a ceasefire to begin on Monday. If the ceasefire holds, Washington and Moscow will work toward establishing a Joint Implementation Center. On Friday, the US began sharing data with Russia on the location of the moderate opposition groups.

Russian officers have contacted representatives of Pentagon and the US special services in Geneva. We are examining the data related to the areas of operation of US-controlled armed groups, which we’ve received today,” Alexander Zorin, special representative of the Russian Defense Ministry, told reporters.

“But a preliminary analysis revealed that the distinctions between the group and terrorists hadn’t been made.”

Previous: #EmailLeak: Colin Powell Reveals Israel Has 200 Nukes, ‘All Targeted on Tehran’
Next: Russia to Supply 12 Mi-35M Helicopters to Nigeria by 2018