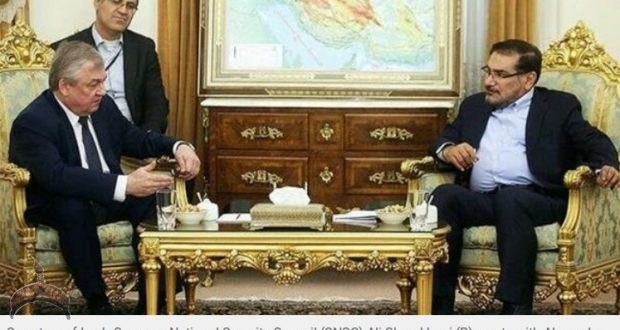 Posted by: BalogunAdesina in World News Comments Off on Putin’s envoy briefs Tehran about Russia-Israel-US meeting

PressTV reports:
Russian President Vladimir Putin’s special envoy says that Moscow has told American and Israeli officials in a recent trilateral meeting that regional stability would be out of reach if Iran’s interests are ignored.

Alexander Lavrentiev, President Putin’s envoy, has traveled to Tehran on a direct order by President Putin to hand over a report on a trilateral meeting that took place among American, Russian, and Israeli officials in the occupied city of Jerusalem al-Quds last month.
In Tehran on Tuesday, and during a meeting with Ali Shamkhani, the secretary of Iran’s Supreme National Security Council (SNSC), Lavrentiev said Russian officials at the meeting had stressed Iran’s interests.

“In this summit, it was explicitly stated that, as a powerful country in the region, Iran is Russia’s friend and strategic partner, and that without regard for Iran’s role and the meeting of the Islamic Republic of Iran’s interests, the attainment of effective and sustainable security in the region would not be possible,” the senior Russian official said, IRNA reported.

Lavrentiev also said the American and Israeli officials present at the meeting were notified of “Russia’s clear and unequivocal position against the ineffective policy of maximum pressure on the Islamic Republic.”
US President Donald Trump has been attempting a policy of so-called maximum pressure against Iran since May 2018, when he unilaterally withdrew America from a multilateral deal with Iran.
Lavrentiev said Iran could not remain unilaterally committed to the 2015 deal, officially known as the Joint Comprehensive Plan of Action (JCPOA), and be denied its legal rights under the agreement while other countries renege on their contractual obligations.
US National Security Adviser John Bolton, a known Iran hawk, was present in the al-Quds meeting.
Tehran condemns Bolton, Israeli Prime Minister Benjamin Netanyahu, and some regional officials for trying to escalate tensions with Iran to the point of military conflict.
According to Lavrentiev, the attendees were also told that Moscow supported Iran’s legal presence in Syria. Tehran has been providing military advisory support to Damascus in the face of militancy and Takfiri terrorism. So has Russia.
Shamkhani, for his part, hailed the positive and developing course of the Russo-Iranian relations and cooperation, and reciprocally identified Moscow as Tehran’s “friend and strategic ally.”
He expressed gratitude for Russia’s “decisive and impartial” positions concerning the JCPOA and Iran’s presence in Syria.
The Iranian official also positively acknowledged Moscow’s objection to the intrusion into Iranian airspace of a US spy drone last month and Britain’s recent move to impound an oil tanker carrying Iranian crude.
He said the US was trying to increase tensions and insecurity in the region to enable more regional arms sales but asserted that the Islamic Republic would continue its political and defensive efforts against the development of instability in the region, “decisively protecting its [own] interests and security.”
Iran Israeli Airstrikes russia U.S.A 2019-07-10
BalogunAdesina