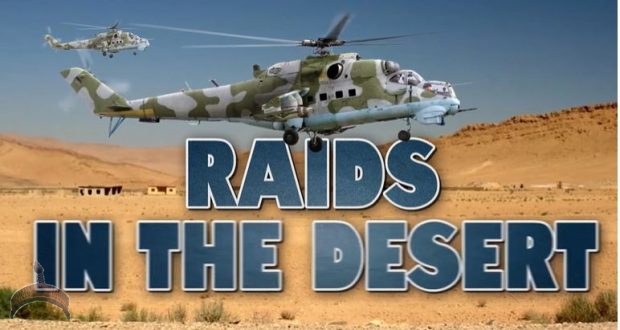 The Syrian Army and its allies continue active efforts to hunt down and neutralize ISIS cells in the Homs-Deir Ezzor desert.

In a recent series of raids, government forces eliminated at least 8 ISIS members that were involved in recent attacks on civilian and military columns moving between the towns of Kobajjep and al-Shoulah. Three pick-up trucks armed with machine guns were also destroyed.

The Russian Aerospace Forces also deployed attack helicopters to support security operations of the Syrian Army. The very same helicopters are involved in providing security to important columns moving along the Homs-Deir Ezzor highway. On top of this, Russian warplanes carried out a few dozens of strikes on ISIS targets across the region.

Pro-government sources argue that now the highway is fully secured. However, it is unlikely that the ISIS threat will be fully neutralized anytime soon. On December 30, at least 25 people were killed when ISIS cells ambushed a bus near Kobajjep on the M20. On January 24, a similar attack left three people dead near al-Shoulah.

The increase of ISIS attacks took place amid tensions between the Syrian Army and the Kurdish-led Syrian Democratic Forces in al-Hasakah and al-Qamishli. The SDF security unit, Asayish, is seeking to limit the freedom of movement of Syrian personnel and pro-government militias in these areas. These attempts have faced a strong resistance from the local Arab population that does not support the pro-US and separatist posture of the Kurdish leaders. Damascus and the Kurdish leadership are allegedly being involved in negotiations to settle the existing issues. Nonetheless, the SDF is not hurrying up to demonstrate any kind of constructive approach. It seems that the leaders of Syrian Kurds will find out that they are also Syrians and should cooperate with Damascus to receive protection not earlier than the Turkish Army once again launches an advance on SDF positions.

Meanwhile, the situation is escalating in Iraq. The new US administration seems to be not going to reduce the number of troops deployed in Iraq and Afghanistan in a move that goes contrary to the agreements and policies of the previous US President.

During his confirmation hearing last week, the new Defense Secretary Lloyd Austin said that Washington was set to reexamine the plan announced by the administration of Donald Trump for reducing the number of troops in Iraq and Afghanistan each to 2,500.

This move is not only putting end to Trump’s attempts to reduce the US involvement in conflicts around the world, but also antagonize a large part of the Iraqi society and political leadership. In January 2020, the Iraqi parliament passed the law demanding the US to withdraw troops from the country. This decision followed the US assassination of top Iranian and Iraqi military commanders, Lieutenant General Qassem Soleimani and Abu Mahdi al-Muhandis, in a drone strike in Baghdad.

This act of the US aggression also led to the increase of activity anti-US armed groups (often linked with Iran) that have already carried out dozens of attacks on supply convoys and targets affiliated with the US-led coalition. This trend will continue to strengthen as long as the main source of tensions, the large-scale US military presence in Iraq, will not be removed.

Previous: Dress Rehearsal Of Colour Revolution In Russia
Next: Fayose: Buhari Has Failed In Securing Nigerians. “Mr Integrity, My Foot”