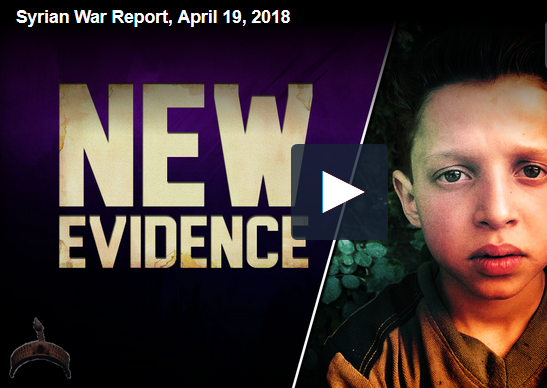 Posted by: BalogunAdesina in World News Comments Off on Syrian War Report – April 2, 2018: Militants Start Their Withdrawal From Key Town Of Douma

On March 31, the Syrian Arab Army (SAA) and its allies established a full control over the southern part of the Damascus suburb of Eastern Ghouta after units of Faylaq al-Rahman and Hayat Tahrir al-Sham (formerly Jabhat al-Nusra) had fully withdrawn from the area.

The Russian Center for Reconciliation of the opposing sides in Syria revealed that a total of 41,126 militants and their family members had left the settlements of Erbin, Jobar, Ein Tarma and Zamalka. Meanwhile, 153,140 civilians have been evacuated since the start of humanitarian pauses in the area.

The area of Douma, controlled by Jaish al-Islam, remains the only point of tensions in the area. On April 1, the Syrian state-run news agency SANA said that an evacuation of militants had been started in Douma. However, later on the same day, Political leader of Jaysh al-Islam Mohamad Alloush denied that his group had reached an evacuation agreement with the Damascus government. According to Alloush, the only reached agreement was aimed at extending the ceasefire in the area.

According to pro-government sources, militants evacuated from Douma were members of Faylaq al-Rahman, not Jaish al-Islam. These militants had retreated to Douma during the earlier SAA advance in the center of Eastern Ghouta.

On March 31, the SAA once again threatened Jaish al-Islam with a military operation if the group does not accept the reconciliation deal. Nonetheless, by April 2 morning, the operation has not been started.

On March 30, two servicemembers of the US-led coalition were killed in an explosion of improvised explosive device in Syria. On March 31, the coalition revealed their identities: Master Sergeant Jonathan Dunbar of the US military and Sergeant Matt Tonroe of the UK military.

According to Alan TV journalist Jenan Mosua, the incident took place near the Sheikh Akil graveyard in the southern part of the city of Manbij and two members of the Kurdish Women’s Protection Units were also wounded in the incident.

Local sources from Manbij also noted that the US-led coalition had increased a number of troops deployed in the area following the incident.
Pro-Kurdish sources blame the IED attack on Turkish-backed armed groups. According to this version, Turkey may use its proxies to increase “costs” of the US-led coalition military presence in Manbij. Turkish leadership have repeatedly claimed that Manbij may become a target of the Turkish military operation in northern Syria.

Some pro-government activists immediately described the alleged Russian airstrikes as a sign of the upcoming anti-terrorist military operation in the area. However, this scenario is highly unlikely:

Previous: I’ve a gay friend, How Can I Tell Him To Stop?
Next: Winnie Mandela: South African Anti-apartheid passes on At 81