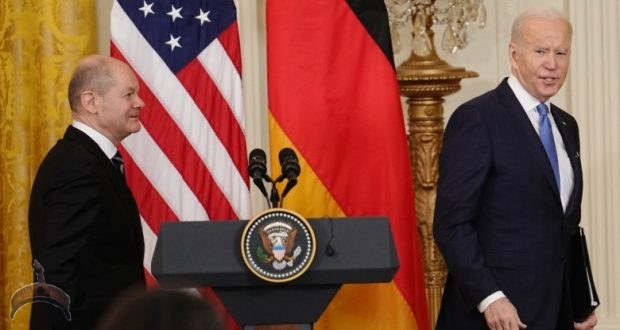 The Crusaders are very, very angry. Who cares?

Posted by: BalogunAdesina in World News Comments Off on The Crusaders are very, very angry. Who cares?

I just listened to Biden (here if you have the stomach). Oh he is pissed, badly.  Putin totally and comprehensively ignored him or the USA (one sign of that is that Putin did warn Scholz and Macron but, apparently, nobody told the White House).

Scholz truly scared the Kremlin when he told that he pulled back the certification of NS2 “jetzt” that is “now”.  Okay, he probably misspoke, he meant “no NS2 forever!”.
Scholz is one tough cookie!

I love it when petty flaccid Eurognomes try to scare Russia.  With sanctions, of all things.

Of all people, the Germans ought to know better.  I guess they don’t.  Fine, I wish the Germans lots of fun!

Where do you think this is headed?

First, he asked who the hell Putin thought he was to recognize states in other sovereign nations?

Second, he warned Russia: we shall judge you by your actions.

I think I can help Biden and give him two very simple replies:

But I also know this: in the minds of the leaders of Zone A both of these replies are literally *unthinkable*.  Ok.

Hence, they will have to be shown that which they currently cannot fathom.

Today the Russian Duma and Federation Council have ratified all the needed documents and given Putin the right to engage Russian forces abroad.  Where exactly was not specified.

Putin was asked about where he would engage the Russian forces and he basically reply “wait and see, we will use them wherever needed and to comply with all our obligations”.

Putin loves to make the western Tabaki-jackals guess his next move.  He is now openly trolling them 🙂

Western Crusaders attacking Russia is nothing new.  But in the past, the Crusaders were at least a credible threat (at times, even a very credible one).

I am sure the Russians are now truly terrified.

What we do know is the the good folks at Commentary Mag are bracing for impact.

Will the people of the USA find out, for the very first time, that the actions of their rulers can actually directly impact them personally?

God willing, they will learn fast and act accordingly.

So far, they have mostly ignored Putin’s warnings to “immediately cease the attacks against the LDNR”.

I don’t know if they are amazingly courageous, very dumb or suicidal.

Either way, I would recommend they heed Putin’s warning, there shall be no more warnings.

True, the know that their western masters don’t give a damn about Russian lives, mass graves, thousands of kidnapped “separatists”, numerous torture centers or open calls to murder.  Fine.  So for 8 years the Ukronazis have murdered the Russian by the tens of thousands.

But don’t they understand that their lives will be the next one?

Or do they really think that the western “advisors” will protect them?

Oh well, I guest that, again, they will have to be shown that which they currently cannot fathom.

From a legal point of view, until now Russia has insisted that this was an internal Ukrainian civil war and not an international conflict.  Now this has changed.

Now, from the point of view of the Kremlin, this is now an international conflict directly involving Russia.

Here I want to use the occasion to congratulate the United West and, especially, the Ukronazis.  For seven years you dreamed about a war involving Russia.  BRAVO! Congrats – now you got what you fought so hard for: the Russian bear has *officially* placed a paw on the LDNR.

Maybe the US forces in the Baltics?

Maybe the Czechs or even the Brits?

Something tells me that “super-pooper sanctions from hell” and hurricanes of hot air are more likely.

Previous: Russian Duma ratifies the recognition of the LDNR
Next: The Truth About Ukraine