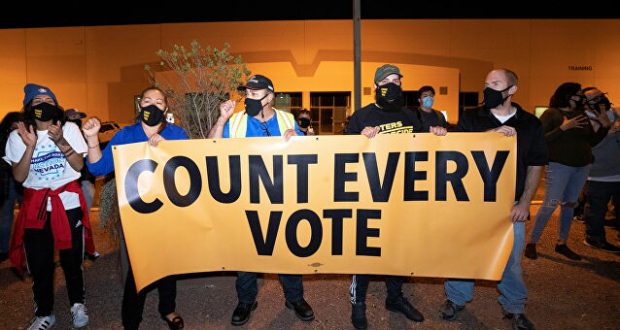 US Election Live Updates: ‘Stop the Steal’ and ‘Count the Vote’ Protests Erupt in Nevada, Michigan

Posted by: BalogunAdesina in Breaking News, World News Comments Off on US Election Live Updates: ‘Stop the Steal’ and ‘Count the Vote’ Protests Erupt in Nevada, Michigan

On 3 November, US voters headed to the polls to vote in the 2020 presidential and congressional elections, but uncertainty remains over when the results will be known, given the record influx of mail-in ballots.

US President Donald Trump and Democratic presidential nominee Joe Biden are neck and neck as the race for the presidential election comes down to the wire with four battleground states close to finishing their vote counts.

Hours after polling places closed on 3 November, both President Donald Trump and Democratic candidate Joe Biden claimed that they were on the path to winning.

As votes are still being counted, some states have said that they will only have some votes counted later this week.

The Trump campaign has alleged for months that fraud may result from the mail-in ballot process, as a last-minute count delivered a narrow win to the president’s rival in Michigan. On Wednesday, the campaign filed lawsuits in the key toss-up states of Michigan, Georgia and Pennsylvania in order to stop the counting of ballots

Several observers of the 2020 US presidential election have been removed from a room where absentee ballots for the state of Michigan are being counted, and many more who claim to be election observers or challengers have been locked out of the facility, the CNN broadcaster reports.

A correspondent from the broadcaster who was at the scene on Wednesday evening said that roughly 134 Republican observers or challengers were inside the counting room at the TCF Center in Detroit.

Several individuals were removed from the facility after tempers flared, the reporter said.

According to video footage from the room carried by other media outlets, staff in the counting facility later proceeded to board the windows up to stop those who were locked outside from viewing the process.

Incumbent President Donald Trump tweeted a link to a Breitbart story covering the incident in the early hours of Thursday morning.

Trump earlier said that he would claim victory in Michigan if, in fact, a large number of ballots have been secretly dumped, which the incumbent president said had been “widely reported.”

Michigan is a key battleground state that looks set to decide the eventual winner of the 2020 US presidential election. Trump led in the state until the counting of absentee ballots began and the Fox News broadcaster called the state for Democratic candidate Joe Biden on Wednesday afternoon. 09:07

09:00 GMT 05.11.2020MOSCOW (Sputnik) – Peaceful protests in Manhattan in the wake of the US presidential election grew into clashes with law enforcement and scattered acts of arson, resulting in around 60 arrests, The New York Times reported on Thursday. Read more 08:10

Trump Leads Biden by 0.5% in Battleground State of Georgia With 95% of Votes Tallied So Far – Edison Research

According to ABC15, the protest in Phoenix started at around 07:30 p.m. local time on Wednesday (02:30 GMT on Thursday). Demonstrators tried to get inside the Maricopa County Elections Department building.

According to the local KTAR-FM radio station, the Maricopa County Elections Department closed the building over concerns about possible unrest at around 10:30 p.m. local time (05:30 GMT on Thursday).

The elections department said in a statement in the early hours of Thursday that it was going to continue counting the votes as planned.

“Staff at the @maricopacounty Elections Department will continue our job, which is to administer elections in the second largest voting jurisdiction in the county. We will release results again tonight as planned. We thank the@mcsoaz [Maricopa County Sheriff’s Office] for doing their job, so we can do ours,” the statement, released on Twitter, says.

CNN reported citing two anonymous sources on Wednesday that Trump’s campaign was considering taking legal action in Arizona and Nevada as votes were still being counted.

06:31 GMT 05.11.2020As the presidential vote count is still ongoing in key American battleground states, the Trump campaign has announced that it will now file lawsuits to stop accepting new ballots in Pennsylvania and Michigan, citing a lack of access to oversee the counting process by Republican observers. Read more

07:36 GMT 05.11.2020Ahead of the US election, Democratic Party officials, buoyed by forecasts from pollsters, had been hoping for double-digit gains to their majority, yet early returns had provided a reality check that is being touted as the harbinger of strategic changes to come within their ranks. Read more

Supporters of Donald Trump Protest Outside Maricopa County in Arizona

Dozens of supporters of President #Trump are protesting outside the #Maricopa County in #Arizona #election center chanting “count the votes” as workers inside tallied crucial mail-in #ballots from the swing state. pic.twitter.com/WGeTB410Ok

06:26 GMT 05.11.2020WASHINGTON (Sputnik) – The 2020 US presidential campaign was marked by severe censorship by social media platforms, and the media kept people in the dark on the scandal around Joe Biden’s son so that they could not accurately evaluate the candidate, former Virginia State Senator Richard Black said. Read more 05:54

05:36 GMT 05.11.2020Paleoconservative professor of political science Claes Ryn previously ventured that it did not matter so much who won the presidential race in the United States, as the country was largely controlled by a kind of non-elected “permanent government”. Read more

05:51 GMT 05.11.2020As the vote tally in the US presidential election continues, with Donald Trump currently trailing his opponent Joe Biden, having secured 214 electoral votes against the Democratic candidate’s 264, the POTUS’ campaign has denounced the counting of votes, claiming “massive cheating”, and has initiated lawsuits. Read more

We got this Trump supporters – stay focused and positivepic.twitter.com/KSdqbSS5ls

Trump Leads Biden by 0.6% in Georgia With 95% of Vote Counted So Far – Edison Research

03:35 GMT 05.11.2020On Tuesday, Americans flocked to polling stations to vote and elect the next US president, choosing between the incumbent POTUS, Donald Trump, and Democratic presidential candidate Joe Biden. While the final results are not yet in, activists have hit the streets in several US cities. Read more 03:01

Democratic presidential candidate Joe Biden has launched a transition website, although the final election results have not yet been announced.

“The American people will determine who will serve as the next President of the United States. Votes are still being counted in several states around the country. The crises facing the country are severe — from a pandemic to an economic recession, climate change to racial injustice — and the transition team will continue preparing at full speed so that the Biden-Harris Administration can hit the ground running on Day One”, says the single statement currently posted on the website. 02:26

WASHINGTON (Sputnik) – Democratic presidential nominee Joe Biden is catching up to President Donald Trump in the battleground state of Pennsylvania with 89 percent of votes counted, results from Fox News showed.

Michigan Secretary of State Jocelyn Benson on Wednesday stated that a lawsuit filed by the Trump administration seeking to stop vote counting in the state is “frivolous”.

She also noted that every valid ballot has been counted in Michigan. 01:24

Police in New York City arrested at least ten people during protests that started after election day, a Sputnik correspondent has reported.

According to a report, people carried flags supporting Joe Biden and chanted insults at police officers. 00:30

According to multiple reports, Nevada will release its election results on Thursday at 9 a.m., local time. 23:00

21:52 GMT 04.11.2020Rudy Giuliani, the former New York mayor who became US President Donald Trump’s lawyer and adviser, told members of the press in Philadelphia, Pennsylvania, on Wednesday the campaign would be filing several lawsuits, possibly even at the national level, to shut down the vote counting in the Keystone State. Read more

Trump Says He Has Won in Pennsylvania, Georgia, North Carolina

Donald Trump said in his Twitter Wednesday that he has won in states of Pennsylvania, Georgia and North Carolina, adding that he can claim Michigan if “there was a large number of secretly dumped ballots as has been widely reported”.

We have claimed, for Electoral Vote purposes, the Commonwealth of Pennsylvania (which won’t allow legal observers) the State of Georgia, and the State of North Carolina, each one of which has a BIG Trump lead. Additionally, we hereby claim the State of Michigan if, in fact,…..

Previous: FG clamps down on #EndSARS promoters, freezes accounts
Next: Results are in: Americans lose, duopoly wins, Trumpism not merely a cult (1/2)