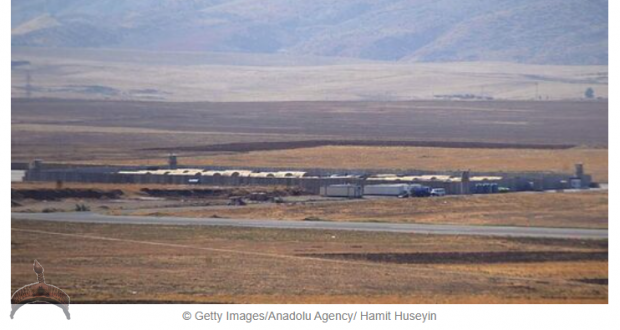 Posted by: BalogunAdesina in Breaking News, World News Comments Off on Video shows multiple rockets land near US consulate in Iraq

Several rockets have reportedly struck an area in Erbil, northern Iraq, near a US diplomatic compound. Erbil is the capital of the semi-autonomous Kurdistan region.

Footage shared online purports to show a series of explosions rocking the area. The apparent strike ignited several fires, and smoke could be seen billowing from the scene.

AP reported, citing Iraqi officials, that at least 12 missiles were launched towards the area. They claimed that several of them struck the American consulate. However, US officials reportedly said that there was no material damage as a result of the attack.

Reports in local media suggested the rockets had damaged the offices of Kurdistan 24 TV station, located near the consulate.

Iran reportedly fired missiles near the US Embassy, affecting the nearby building of Kurdistan 24 Channel. pic.twitter.com/ewlxUKIc2n

The incident did not result in any casualties, Kurdistani Health Minister Saman Barzanji told local media, as quoted by Reuters. Politico’s Paul McLeary also reported, citing a US defense official, that there have not been any casualties among American personnel.

No one has claimed responsibility for the incident so far. Kurdistan-based Rudaw network reported that the missiles “originated from outside the Kurdistan region and Iraq,” citing the regional counter-terrorism authority.

The US continues to occupy Iraq despite its parliament voting that they leave.

This attack also follows on the heels of news that, 4 days ago, Israel killed two of Iran’s Revolutionary Guards in Syria, to which Iran vowed it would seek revenge.