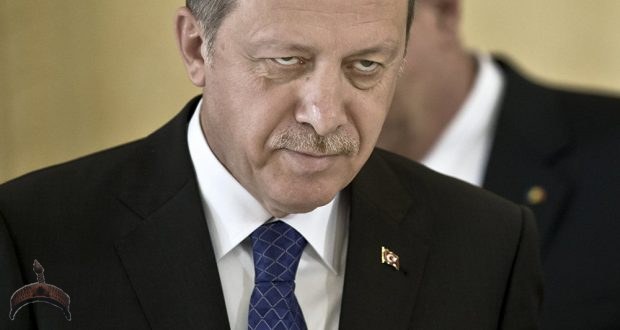 Posted by: BalogunAdesina in World News Comments Off on Erdogan’s Long-Coming Reality Check:

by Ghassan Kadi for Ooduarere Via The Saker Blog

It is hard to say if Erdogan is running out of choices, friends, time, or all of the above; and his stands on various issues and the contradictions he ploughs through are making his situation increasingly untenable.

For the benefit of readers who haven’t heard this before; Erdogan is juggling being a Turkish Muslim reformer who parades under the photos of Turkish secular anti-Muslim nation-builder Mustafa Kemal; an EU-aspiring member and also an aspiring global Sunni leader; an ally of Israel as well as Hamas; an Islamist who is also at odds with the Wahhabi Islamists; a nationalist Turk who wants to curb Kurdish aspirations not only in Syria and Iraq but also in Turkey; a Sunni leader who wants to restore the Sultanate and Caliphate and the fundamentalist Sunni version of anti-Shiite Islam but is also a friend of Shiite Iran; a NATO member with a special relationship with America, and a special friend and ally of Russia.

Ironically, despite all the contradictions and conflicts of interest, he has thus far managed to get away with wearing not only all those hats, but also turbans and fezzes in between. Clearly however, this maneuvering cannot last forever and, sooner or later, he is going to end up painted into a tight corner. I certainly would like to believe that he is already in this space.

Erdogan however believes that he has a mandate from God. Following his November 2015 election win, in an article titled “Erdogan the Trojan Horse of Terror” (https://thesaker.is/erdogan-the-trojan-horse-of-terror/), I wrote: “With this win, Erdogan felt invincible. For an Islamist, and this is what Erdogan is, feeling invincible takes on a whole new meaning.

This is a simplistic translation of a Quranic verse: “If God is by your side, no one can defeat you” (Quran 3:160).

Erdogan believes he is invincible because he believes that he is on a mission and that God is by his side. If he had any reason to doubt this divine role he believes he has, the November election results put that doubt to rest.”

Ironically, Erdogan is able to comprehend the contradictions of others. Whilst America for example does not give two hoots about the Syrian Kurds and is only using some vulnerable leaders to dig a wedge between the Syrian Government and the Syrian Kurdish population, Erdogan has most vehemently stated to both the Obama and Trump administrations that America cannot be an ally of Turkey and the Kurds at the same time.

Yet, this same Erdogan justifies for himself the supplying of Idlib terrorists with state-of-the-art weaponry to attack not only Syrian Army units with, but also the Russian Hmeimim Air Base. The Russians have thus far thwarted countless attempted drone attacks on the base, and if Turkey did not directly supply the weapons, it definitely facilitated their transport.

Remember that the Idlib area that is controlled by Tahrir al-Sham (formerly known as Al-Nusra) lies between the Syrian-Army controlled area and the Turkish border. It has an open highway to Turkey where all arms and fighters move freely from Turkey into Syria.

And even though Erdogan has signed an agreement with Russia to end the terrorist presence in Idlib, according to veteran Palestinian journalist Abdul Bari Atwan, he does not want to understand why Russia is fed up with him and his antics and why President Putin is refusing to meet with him. In his article written in Raialyoum https://www.raialyoum.com/index.php/لماذا-يرفض-بوتين-لقاء-قمة-مع-اردوغان-لح/, Atwan argues that the Russians refuse Erdogan’s call for a new disengagement negotiation meeting and that Turkey must adhere to the existing Sochi agreement; which it has broken on several occasions by Erdogan.

Firstly: “the Turkish gamble and reliance on Syrian opposition and the Free Syria Army in particular have failed because those forces abandoned their positions and the Syrian Army entered the towns of Khan Sheikhoun and Maarra Al-Numan unopposed without suffering a single casualty

Secondly: The 12 Turkish surveillance posts that were established in the Idlib district have turned into a liability because seven of them are under siege by the Syrian Army with a hundred Turkish soldiers trapped in each and can easily be destroyed by the Syrian Army in case Turkey launches a major offensive against Syria.

Thirdly: Russian support to the Syrian Army has reached an unprecedented level after the Russians shot down two drones launched by Tahrir Al-Sham yesterday” (ie the 10th of February 2020).

In addition, according to Atwan, “Erdogan missed a golden opportunity when he refused the (recent) Iranian initiative proposed to him by Iranian FM, Zarif, to find a political resolution for the impasse with Syria, and this was perhaps the last opportunity to reach a diplomatic resolution before a direct open confrontation with Syria”

In a Financial Times article titled “Testing Times for Erdogan and Putin” https://www.ft.com/content/cbe31640-4726-11ea-aeb3-955839e06441, the author is a tad short of saying that the relationship between Erdogan and Putin is irreconcilable. According to him, “If Turkey’s president Recep Tayyip Erdogan was looking for a way to convey his anger at Russia over the death of eight of his country’s troops in Syria, a visit to Ukraine provided the perfect opportunity.

At a guard of honour at the presidential palace in Kyiv on Monday, Mr Erdogan shouted “Glory to Ukraine”, a nationalist slogan deeply associated with anti-Russia sentiment and the country’s fight for independence after the collapse of the Soviet Union.

His carefully chosen words — to an army battling Russia-backed separatists in eastern Ukraine — were a clear rebuke to President Vladimir Putin”.

In all of this, what Erdogan needs more than anything, is a long-coming reality check, and it seems more forthcoming than ever.

He may believe that he is a president for life who deserves the purportedly one thousand room palace he built for himself. He may hope to rebuild the Ottoman Empire and resurrect the Caliphate. He may imagine that, having been able to build up the Turkish economy to a level that has earnt a position in the G20, he has become the leader of a super power; but he has not. Turkey is at best a regional power, but it is only powerful if it has more powerful friends and allies to back it up. For as long as Turkey has to literally beg the Russians and/or the Americans to buy state-of-the-art weapons to defend itself with, then it is not in a position that allows it to stand on its own feet; not in the manner that Erdogan wishes it to stand. He should take heed and look at history. Mehmet Al-Fatih built his own guns to breakdown the defence walls of Constantinople. Even though the engineer who built them was from the Balkans, but they were Mehmet’s guns and they were the biggest in the world at the time.

I am not advocating that Erdogan should build his own nuclear arsenal, fighter jets and defence and attack missiles. In the ideal world, no one should. But to add to his list of contradictions, if Erdogan wants to wear the Turban of the Sultan, huff and puff at Russia, he cannot be riding Don Quixote’s donkey at the same time.

And if he thinks that he can now make a U-turn and be the loyal NATO leader and dump Russia, he will find himself again facing the same impasse he had with the Americans over the Kurdish issue. Furthermore, what will this do to his trade deals with Russia and his gas supplies?

And if Erdogan also thinks that America would come forward to save him in Idlib, one would have to remember that the illegal American presence in North East Syria is hundreds of kilometres away from Idlib and separated by the Russian-backed Syrian Army. Why would America, even Trump’s America, risk a confrontation with Russia to save his hide?

Erdogan has thus far evaded Karma because he has been hedging his bets in all directions, working up his enemies and allies against each other. But unless one is powerful enough to stand on his own feet when he needs to, then such a strategy in the long run can only leave one with no friends, a long list of enemies and a hoard of untrusting onlookers.

Above all, what do Turkish people want from the Turkish presence in Syria? Turkey hasn’t been at war for a whole century. The leader that once promised “zero problems” with neighbours is digging in his heels and seems determined to engage in an all-out war with Syria. The average Turkish citizen may ask why and to what end?

Erdogan has hopefully finally wedged himself into a corner that he cannot weasel his way out of without losing face. He will either have to bolster his military presence in Syria and fight the Syrian Army and Russia, or back off. If he takes the former option, he will not find any international supporters, and possibly the support of his own people will become questionable. But if the psychopathic, megalomaniac feels that he has to retreat, he will be scrambling for a face-saving exit, and the options are running out.

Russia was prepared to put the deliberate Turkish downing of the Su-24 in November 2015 behind and move forward. A lifeline was given to Erdogan back then, based on the promises he made and the later agreements he signed. But time proved that he was only looking for buying time, and that window with Russia is up.

Body bags have already been sent to Turkey and there are unconfirmed figures of how many Turkish soldiers have been killed defending Al-Nusra fighters. What is pertinent here is that, in the event of an all-out war with Syria, Syrians will be fighting an existential battle, aided by Russia and regional allies. Turkey however, will be fighting a different type of existential battle; one for Erdogan, not for Turkey itself.

Turkey has no reason for having a military presence and fight in Syria. It is only Erdogan’s ego and dreams that do.

Previous: Understanding why they lie and why they get away with it
Next: Adventures Of Idlib Hipsters. American Waterloo In Khirbat Amu