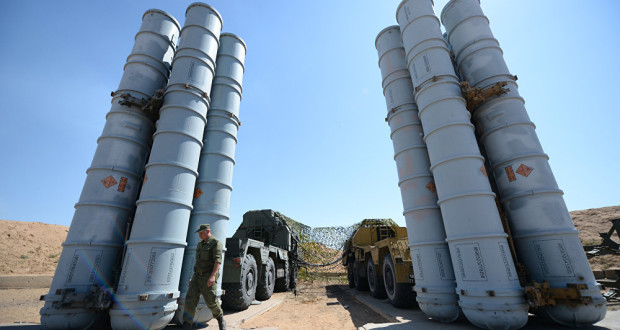 Video: S-400s Bound for Turkey Being Loaded Up Aboard Massive Russian Cargo Plane

Posted by: BalogunAdesina in World News Comments Off on Video: S-400s Bound for Turkey Being Loaded Up Aboard Massive Russian Cargo Plane

Earlier Friday, Turkey’s Defence Ministry reported that the first batch of components for its Russian-made S-400 missile defence systems had been delivered to the Murted Air Base in Ankara Province.

The Russian Defence Ministry has published footage of the delivery of S-400 components to Turkey aboard a massive Antonov An-124-100 aircraft.

The video shows the plane’s front nose opening up at a Russian airbase, with multiple S-400 components fitted aboard heavy Ural trucks shown driving into the plane and being secured for transit. Later, a BAZ hauler quietly drives down the runway toward the plane carrying an enclosed component, before loading side by side with the other vehicles. More Ural trucks are then seen driving onto the plane, while the launchers themselves are not shown.

About 5 minutes into the video, the vehicles are seen being removed from the plane after it has touched down in Turkey, lining up in single file and driving in an unknown direction.

Earlier Friday, the Turkish military confirmed that the first batch of S-400s had been delivered to Turkey, with state television reporting that two more planes filled with S-400 components had landed at the Murted Air Base the same day.

NATO responded to the delivery by voicing its “concern” over the “possible consequences” of Turkey’s acquisition of the Russian air defence system, reiterating sentiments expressed many times before about the systems’ supposed incompatibility with NATO and US systems.
US and NATO officials have repeatedly warned that the S-400s’ presence in Turkey might allow Russia to collect information about NATO systems, as well as the F-35 fighter and its stealth components. In May, a senior Pentagon official said the deployment of the S-400s would be “devastating,” both for the F-35 programme and in terms of continued Turkish interoperability with NATO.

Last week, Turkish President Recep Tayyip Erdogan said the decision on where specifically to deploy the S-400s would be made by the Defence Ministry and the General Staff, and expressed hope that the system’s presence in Turkey would benefit not only Turkey, ‘but the entire region’. On Wednesday, Erdogan said he had high hopes about the “joint production” of the system in the future.
Ever since Russia and Turkey penned their $2.5 billion agreement on the sale of four battalion sets of S-400s to Turkey in late 2017, the US has vacillated between threatening Ankara with sanctions and promising to cancel the delivery of its F-35 warplanes, and offering Turkey its Patriot PAC-3 air defence system in the S-400s’ stead. Ankara has not ruled out the Patriot offer, but stressed it would not buy the systems in place of its S-400s.

Washington has given Ankara until the end of the month to scrap the S-400 deal, saying Turkey won’t get its 116 F-35s if the deal is not cancelled. Turkey invested over a billion dollars into the F-35 programme and continues to produce several components for the aircraft, but has yet to take possession of a single F-35, with four of jets destined for Turkey stuck at a US airbase and Turkish pilots training aboard the planes grounded last month.

The S-400 is the most advanced mobile air defence system in Russia’s arsenal, and is capable of detecting, tracking and destroying all categories of manned aircraft (including stealth), as well as drones, cruise and ballistic missiles. Along with Russia, the system is fielded by Belarus, China, and soon, Turkey.

Late last year, Moscow and New Delhi signed a contract worth $5 billion for the delivery of ten battalion sets of S-400s to India.