Posted by: BalogunAdesina in World News Comments Off on SITREP: Iraq’s million-man march against US occupation, and Pentagon admits to 34 injuries from Iran strike

by Aram Mirzaei for Ooduarere via The Saker Blog

Iraqis have rallied in Baghdad in massive numbers to call for an end to US military presence in the country following high-profile assassinations and airstrikes targeting anti-terror forces.

Sayed Sadiq al-Hashemi, the director of the Iraqi Center for Studies, said more than 2.5 million took part in the demonstrations on Friday.

Since the early hours on Friday, huge crowds of men, women and children of all ages converged on the Jadriyah neighborhood near Baghdad University.

The protesters were seen carrying banners and chanting slogans calling for the expulsion of US forces.
“Get out, get out, occupier!” some shouted, while others chanted, “Yes to sovereignty!”
The massive rally came after influential cleric Muqtada al-Sadr called on Iraqis to stage “a million-strong, peaceful, unified demonstration to condemn the American presence and its violations”.
Sadr issued a statement on Friday calling for US bases to be shut down and Iraqi airspace closed to US warplanes and surveillance aircraft.

He warned that US presence in the country will be dealt with as an occupying force if Washington does not agree with Iraqi demands to withdraw for the country.
In a message delivered through a representative at Friday prayer in the holy city of Karbala, top cleric Ayatollah Ali al-Sistani also urged Iraqi political groups to do what is needed to the safeguard the country’s sovereignty.
He called on Iraqi groups to stand united, far from any foreign influence in countering the dangers which threaten the country.

On Thursday ahead of the planned rallies, Sadr called on Iraqis to mobilize and defend the country’s independence and sovereignty.

“Oh women, men and youth of the country, the time is now upon us to defend the country, its sovereignty and dependence,” Sadr said in a tweet.

“Spread the word of an independent future Iraq that will be ruled by the righteous; an Iraq which will not know of corruption nor aggression” he added, calling on Iraqis to expel the “tyrants”.

While no official number has been released, the march itself is likely one of the largest in the history of Iraq.

More ‘concussions’ are confirmed by the US

The Pentagon has said that dozens of US troops were wounded in an Iranian retaliatory missile attack earlier this month despite Washington’s initial claim denying casualties.

The Pentagon said on Friday 34 service members have been diagnosed with traumatic brain injury following the Iran strike on January 8. They suffered concussions.

Hoffman said that the eight injured troops who had been previously transported to Germany had been moved to the United States, but nine of them still remain there.

“They will continue to receive treatment in the United States, either at Walter Reed (a military hospital near Washington) or at their home bases,” he said.

The nine other victims “are still undergoing evaluation and treatment there (in Germany),” he added. 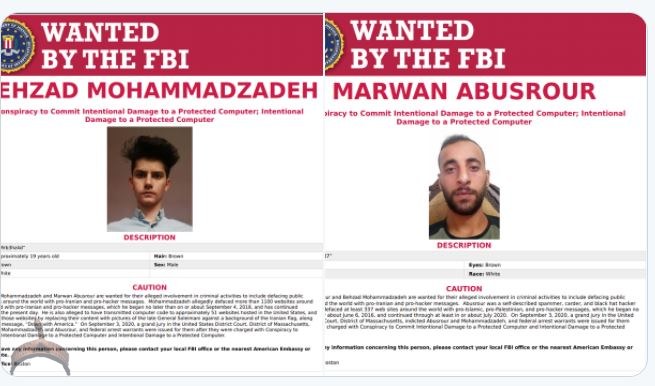 The U.S. has indicted two alleged computer hackers on charges of damaging several American websites in response for the assassination of Iran’s Quds Force commander Qassim Soleimani earlier this year. In a statement released on September 15, the U.S. Attorney’s Office in District of Massachusetts identified the alleged hackers as 19-year old Iranian national Behzad Mohammadzadeh, aka “Mrb3hz4d,” and 25-year old Palestinian national Marwan Abusrour, aka “Mrwn007.” Iranian hackers ‘Behzad Mohammadzadeh’ and ‘Marwan Abusrour’ have been indicted on charges that ...