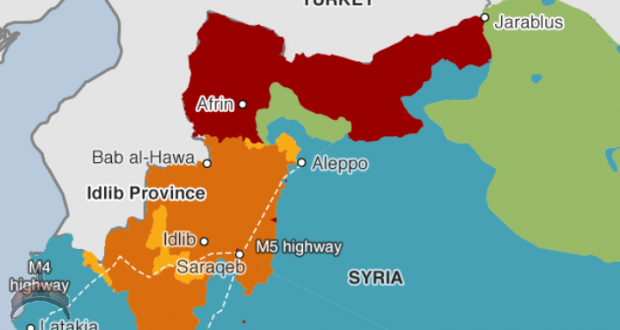 by Ghassan Kadi for Ooduarere via The Saker Blog
Even though the Syrian Army, with the aid of its international friends and allies, especially Russia, has been able to score many victories and liberate most of Syria’s major cities from the control of terrorist groups, the fight is far from over.
Before the situation in the American-controlled North-East is addressed, the Western regions, including Idlib and its surrounds must be put back fully under the legitimate government control.
As a matter of fact, politically speaking, the situation now is perhaps more complex to deal with than nine years ago when the “War on Syria” took form. Almost exactly nine years ago, the enemies of Syria combined efforts to launch a joint attack. United only by their hatred for Syria, they had diverse agendas, but they combined efforts in order to capitalize on each other’s strengths. The Wahhabi version of Islamists, headed by Saudi Arabia, joined hands with the Muslim Brotherhood version headed by Turkey and financed by Qatar, and they all joined hands with NATO, Israel and Lebanese ultra-right militia among other vendetta groups, for the single purpose of deposing President Assad and replacing the legitimate secular Syrian Government with one that is sectarian and pliable to the will of the Western roadmap.
They failed.
They failed in achieving their combined objectives and some of the armies they created, such as Jaysh Al-Islam, headed by former Syrian Army officer Zahran Alloush, ceased to exist. Alloush was killed in a Syrian Army attack in December 2015, but the casualties also included conspirators who were sidelined and lost their careers; the most prominent of which is Prince Bandar Bin Sultan, who was perhaps the single biggest architect of the attack on Syria.

The tides began to turn in favour of Syria after the Syrian Army scored its huge victory in the Battle of Qusayr in mid-2013. This was a decisive battle that basically disabled the terrorists from linking the Damascus province with their northern supply lines. Without this victory, in retrospect, it would be arguable if Syria would have been able to earn much support from Russia; if any at all. Syria had to show a fighting spirit, resolve, determination and respect for her to reach such an echelon. After all, Russia does not only by tradition honour and respect those who stand up with dignity against all odds, but on the geopolitical scene, and after decades of being sidelined by the Western bloc, any Russian global move had to be fully and thoroughly assessed before any venture was to be undertaken.

It was crucial for Russia therefore, and for President Putin in particular, to ensure that the presence of Russian troops in Syria had very high chances of success.

The fragmentation of Syria’s enemies began to take form before Russian action in the skies and on the soil of Syria. The Saudi’s first and biggest disappointment was when the USA refused to level Damascus to the ground after Prince Bandar orchestrated the alleged Ghouta chemical attack in September 2013. That was Bandar’s last draw after the loss of Al-Qusayr and his attempts to blackmail Putin by threatening him to unleash Islamists in Chechnya.

From that point in time onwards, the Saudi role in the “War on Syria” dwindled and came to an end with the demise of Alloush. But as the tensions between Qatar and Saudi Arabia emerged in 2017, Qatar remained “represented” via its ally Turkey.

Erdogan was initially determined to victoriously pray at the Omayyad Mosque in Damascus early in the piece. But he is still determined to get a bite of the cherry, a consolation prize, despite all the setbacks that his former camp has endured.

After Turkey downed the Russian Su-24 in November 2015, the relationship between Turkey and Russia reached its nadir. But the pragmatist Erdogan soon apologized to Putin and eventually reached an agreement about how to deal with the deadlock situation in Idlib.
But Erdogan is not coming clean about his commitment to what became to be known as the Sochi Agreement. https://thedefensepost.com/2019/10/22/russia-turkey-syria-mou/.
Erdogan defiantly continues to wear the hat of a fully-fledged NATO member, a close friend and ally of Russia, the leader of the nation that is desirous to enter the EU, an Islamist who wants to rebuild the Ottoman Empire, and a nationalist who is willing and able to deal with Kurdish issue. What he does not see is that whilst those antics gain him popularity amongst sympathetic Muslim supporters, on the international scene, he is increasingly making a mockery out of himself.

His clear-to-see contradictions seem mind-boggling, but to the pragmatic Erdogan who is trying as hard as he can to be Sultan, his mind is fixated on Islamism and nationalism, and he is performing as if he has found himself a Fatwa that permits him to dance to the tunes of the devil to reach his ultimate objectives.
Among other things, to Putin, Erdogan portrays himself as Russia’s friend who is reconsidering his alliance with the US and even wants to buy Russian S-400 defence missile systems. To America, he remains as a NATO member and an American ally who wants to buy America’s latest state-of the-art F-35 fighter jets. On one hand, he makes verbal attacks against Israel, but continues to opt to have strong diplomatic ties with that state. He pledges support for the Palestinian cause but offers no evidence to put his words into action.

If Erdogan truly deserves any recognition and respect at all, it would have to be for his ability to meander his way through and survive amongst all the contradictions that he has deliberately and systemically implanted along his path.
He could be running out of options; at least in Syria, but this doesn’t stop him from making yet more contradictory statements within a few days of each other. By the end of January 2020 he threatened to take a new offensive in Syria over the Russian-backed Syrian Army offensive in Idlib. https://sputniknews.com/middleeast/202001311078189883-erdogan-threatens-new-offensive-in-syria—report/ A few days later, he made a U-turn and declared that he will not allow the situation in Idlib to sour his relationship with Russia.
https://sputniknews.com/middleeast/202002041078225599-turkey-will-not-escalate-tensions-with-russia-over-syrias-idlib—erdogan/?fbclid=IwAR1X6tQuRrWsX5iQ3kJCJaxFoR11cnfJpj–VlYhuUu9ZXLK6OQal0kiHaw But in between the two statements which are only four days apart, the Syrian Army has shelled Turkish positions and purportedly killed six Turkish soldiers and injured about a dozen. Whilst such an unprecedented incident should have sent Erdogan firing up as one would expect, according to Palestinian veteran journalist, Abdul Bari Atwan, this wasn’t to happen this time.
In a translation-worthy article, Russia and Syria have decided to take action in Idlib and they are no longer waiting for Erdogan to abide by his promises and agreements.

Atwan’s article’s title translates as: “What does the Syrian shelling of Turkish troops in Sarakob and the killing of six Turkish soldiers signify? And, what is the Russian message to Erdogan? And, did the Russians and the Turks tear up the Sochi Agreement? And, who will emerge as a winner in the bone-crushing battle in Idlib?”
https://www.raialyoum.com/index.php/ماذا-يعني-القصف-السوري-لقوات-تركية-في-س/
According to Atwan’s analysis, the Syrian shelling of Turkish positions signaled the end of the line of joint Russian-Syrian patience with Erdogan’s lack of commitment to the Sochi Agreement. Atwan argues that opinion polls within Turkey indicate that Erdogan does not have the support of escalating in Syria and neither that of sending troops to Libya for that matter.

Did Atwan see the end of the line of Erdogan’s lies and contradictions this time? I personally hope he did. I must admit that in my previous analysis I have predicted several times that Erdogan had made his final and detrimental mistake . Somehow he always manages to slither out of the hole he was in and keep going.
Has he made his final and lethal mistake or is he going to relent and let Syria be?Time will tell.
Syria Turkey 2020-02-07
BalogunAdesina