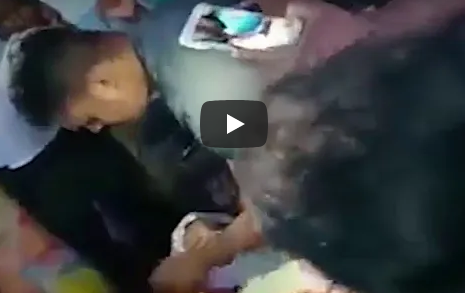 Posted by: Lolade in Foreign Comments Off on Indian Man Ties the knot with His Dead Fiancée at Her Funeral (GRAPHIC VIDEO)

A 24-year-old Indian man has promised to remain single for the remainder of his life after his girlfriend died in a shuttle accident in Tamil Nadu, southern India.

Extremely graphic footage of a grief-stricken man marrying his deceased girlfriend in India was unearthed online this week.

At the funeral-cum-wedding ceremony, he is seen performing a ritual in accordance with Indian traditions, before a large number of mourners, putting red powder on the parting of his fiancée’s hair and applying a red dot on her  forehead as a symbol of marriage.

WARNING: These video is graphic and may offend sensibilities

Both were dating for a long time and were preparing to tie the knot once the young woman died in a shuttle accident in the southern state of Tamil Nadu. In a significantly macabre bid to fulfill his promise to help keep her in his life forever, the person chose to marry his dead fiancée.

Previous: Evidence that Putin organized the Paris Kerch Provocation – Causes and Consequences
Next: Zionism, Judaism and the Jewish State of Israel