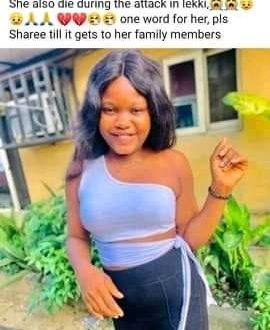 Posted by: AbubakarMuhd in Breaking News, Metro life Comments Off on #LekkiMassacre: I’m Not Dead – Lady Cries Out After Seeing Her ‘RIP’ Online

A lady allegedly killed by the Nigerian Army during the shooting that greeted the #ENDSARS protest at Lekki Tollgate, Lagos, said she’s still alive and hearty.

She said the rumours of her death was a purported attack by unscrupulous elements who hid under the End SARS protest to tarnish her image.

Security agents had allegedly shot at #ENDSARS protesters at the Lekki Tollgate on Tuesday, October 20, leading to yet-to-be ascertained number of casualties.

The shooting incident had also attracted national and international outcry, with the Lagos State and Federal governments being urged to unravel the identity of the shooters and who deployed them.

The alleged Lekki Tollgate death victim, Stephen Becky, spoke to our correspondent via telephone call on Tuesday while describing the news of her death as “untrue and unbelievable”.

Becky, who finished from Jireh Educational Centre in 2018, hails from Rivers State where she currently resides with her father and six other siblings.

According to her, she got the news of her death from a friend of her elder sister who screenshot it from a group and sent to her sister’s Direct Message (DM).

“Someone posted my picture that I was among the people that was shot at Lekki Tollgate. I was very sad and angry for someone to use my picture to write RIP (Rest in Peace) when I am still alive.

“Please, I want people to know that I am very much alive, the tension they are giving my parents and siblings is too much,” Becky told Vanguard Community during an exclusive interview.

The Rivers-born said her mother had to travel from the village to check on her when she heard the rumoured news of her death, urging the members of the public to discard the news.

Vanguard learnt the purported news of Miss Becky’s death was first posted by a Facebook user but later brought down by the latter when confronted by a friend of the former’s sister.

Reacting, Ihuoma Favour, the friend of Becky’s sister described the story as falsehood while narrating how the saga started.

“I went online and saw the post (Becky’s obituary); l’m a member in one Facebook group, so anything posted there, definitely l’m gonna see it unless l’m not online. So, I saw the post because the person attached it with that group. I immediately screenshot the picture and called Becky’s elder sister to confirm.

“So, when I heard her (Becky’s sister) voice, I told her what I saw and also sent it to her. She told me her sister (Becky) was with her and that I should discard the story.

“I chatted the lady that posted the news to discard the rumours of Becky’s death but to my amazement, she (the poster) replied: ‘Ok she survive’. I scolded her but she never replied after then,”

On her relationship with the alleged victim, Favour said; “Becky Stephen is my friend’s junior sister and also my junior in school back then. She’s someone I know so well, she doesn’t have problem and respect people.”

She however, cautioned those spreading rumours of Becky’s death to desist from such act.

“So I see no reason why someone would post such thing about her. They should please stop posting news of her death,” she concluded.