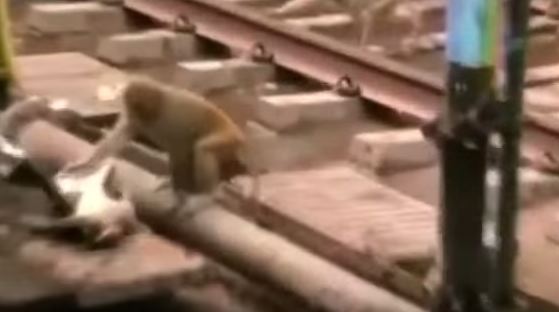 Posted by: admin in Breaking News, Foreign Comments Off on Unbelievable: Video of Monkey Saving A dying monkey friend

A monkey has saved the life of another monkey that had fallen oblivious subsequent to being electrocuted in northern Indian town of Kanpur in Uttar Pradesh. The occurrence took place at the Kanpur railroad station. The monkey was shocked and fell on the railroad tracks unconscious while strolling on the high pressure wires at the station. A kindred monkey recognized the poor primate and works hard for nearly 20 minutes to resuscitate it.

The monkey attempted to resuscitate its injured companion by over and over gnawing, hitting and tipping it in the water. Its endeavors at last paid dividends and the injured creature could walk away from the railroad tracks.

Watch the video after the page break.

Previous: Back in the Day Photo of President Buhari
Next: Did Donald Trump really say this about Nigeria ?? See Quote