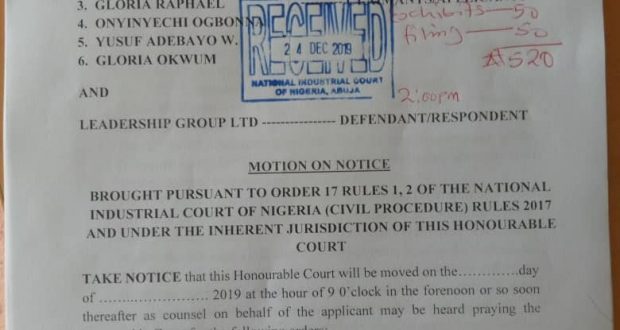 Six employees of the Leadership Group Limited have dragged their employers to court demanding N10billion from it for defamation following publications describing them as thieves.

The publication read: “The under-listed individuals have stolen money belonging to LEADERSHIP. Anyone with information about their whereabouts should report to the nearest police station.

“LEADERSHIP has been a victim of massive theft both within and outside the organisation and investigations are still going on.

“More names and photographs of persons within and outside the organisation who are implicated would be added to this list from time to time.”

The plaintiffs, in court processes filed on Dec. 24 at the National Industrial Court, Abuja, demanded N10 billion compensation from Leadership Newspaper for the defamatory publication.

Olajengbesi had on Dec. 22 written to the organisation to retract the publication against his clients within 24 hours or face legal battle, emphasising that only a law court had powers to convict anyone of crime.

“Our Clients unequivocally and emphatically deny all limbs and substance of the allegation contained in the said publication as same is untrue, unfounded, unwarranted and malicious.

“The said publication is clearly calculated to reduce the estimation of our clients in the eyes of right-thinking members of the society.

“For the records, and in re-stating the obvious, our clients are lawfully engaged members of your staff entitled to monthly salary which your company has not been able to pay for over 36 months and in some cases 12 months.

“Yet, our clients’ diligence and outstanding performances in the above regard have earned them promotions, evidenced by letters of promotions from your company, as an indication of your wholehearted satisfaction with the services rendered to your company by our clients till date.

“It is in the course of our clients’ diligent duties to your company that they secured advert placements from some members of the public who in some circumstances made part payments upfront as a form of commitment for advert placements, a gesture which your company ratified and acted on severally and even commenced the said adverts.

“This has also been justified in a series of memos issued to our clients by your company identifying the need to reconcile advert debts and also requesting for modality for payment,” Olajengbesi letter read.

Mr Jonathan Nda-Isaiah, a member of the Editorial Board, Leadership Newspaper told NAN that the employees in question converted into personal use huge amount of adverts money paid to them by clients.

“I am not aware they went to court; I only know that the employees in question diverted advert money but it’s the HR people or the MD that can speak on it,” he said.

Also speaking, the Managing Director of the organisation, Mr Muazu Elazeh, told NAN that he has yet to see the court papers but would mandate their lawyer to follow up the matter.

“I cannot respond to what I have not seen; I think the normal thing is for me to see it first before I start responding, I am just hearing it from you now,” Elazeh said. (NAN)

Previous: No Word Like Christmas In The Bible – Olukoya
Next: Buhari recently celebrated his 77th birthday while his younger sister, Rakiya is celebrating her 84th – Femi Aribisala claims