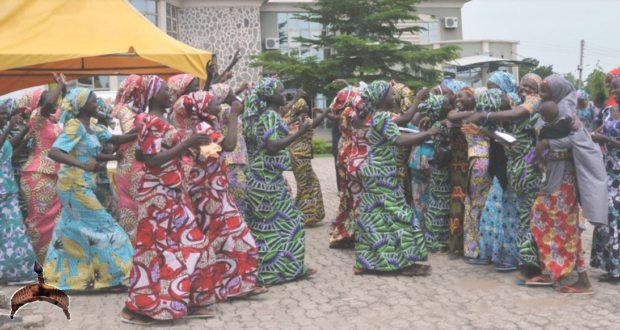 Posted by: Lolade in Breaking News, Local News Comments Off on Dozens of Chibok Girls regain freedom, Reunite with Their Families

The dozens of Nigerian schoolgirls who were freed from their Boko Haram kidnappers earlier this month have finally been reunited with their families.

The 82 ladies, have been among the 276 kidnapped in 2014 from their school in the little town of Chibok in northeastern Nigeria, were picked up by Nigerian authorities after their release May 7 and taken quickly to the capital, Abuja, but have only now been reunited with their own families there.

“I am really happy today, I am Christmas and New Year, I am very happy and I thank God,” Godiya Joshua, whose daughter Esther was among those freed, said, AP reports.

The scene of the reunion was tearful and emotional; however, many of the families at the reunion event told German news outlet DW that the actual celebration could only begin when all of the missing girls had come home.

Girls were returned after a deal was struck between the militants and the Nigerian government, and five commanders of the extremist group were released in the exchange. The federal government has promised to keep to work to make the 113 women who remain in captivity home. The recently released girls were also reunited with other 21 of the schoolmates who were freed in October.

The 82 girls released this month have now been staying in facilities at the Department of State Services in the capital and received medical and other checks in the weeks since their release. They’re to take part in a nine-month reintegration program that’s to be overseen by the greatest levels of the Nigerian government. Before having the capability to see their own families again, they met with several Nigerian politicians.

Many of the kidnapped girls were forced to marry their captors and have borne them children. Some have grown to be Boko Haram followers and have refused to return. According to the Nigerian government, there was supposed to be an additional girl in this group, but she refused to part with her husband. It’s feared that others have now been used in suicide bomb attacks. Thousands have now been kidnapped in northern Nigeria since the extremist group began its fight in 2009 to set up a unique Islamic state, and more than 20,000 have now been killed.

The kidnapping of the nearly 300 schoolgirls drew international attention to the problem and sparked the Bring Back Our Girls campaign to pressure the Nigerian government to rescue them. 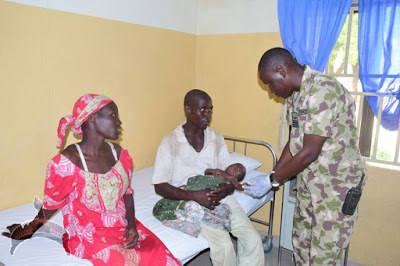 The rescued Chibok school girl, Amina Ali, was airlifted by Nigeria Air Force Super Puma aircraft from Damboa to Maiduguri alongside her baby and supposed husband, Mohammed Hayatu. Prior to that they were examined at Air Force medical facility and were found to be stable and normal blood pressure was observed. Thereafter, she was released to the Operation LAFIYA DOLE headquarters for further investigation and handing over. See more photos afterthe page break.