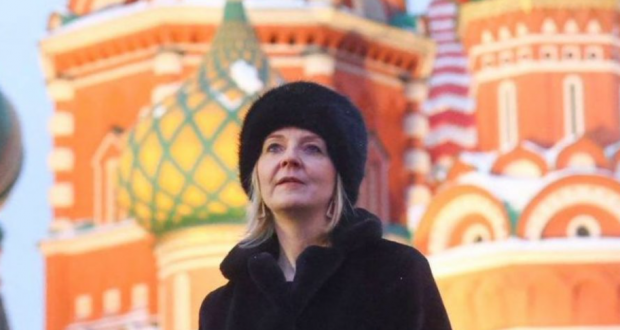 A few assorted news about what is taking place

Posted by: BalogunAdesina in World News Comments Off on A few assorted news about what is taking place

Foreign Secretary Liz Truss is visiting Moscow.  She met with Lavrov.  The meeting failed to produce anything.  Considering that Truss is this genius who rides around in tanks but does not know that the Baltic States are not on the Black Sea, that is hardly a surprise.  The fact that she refused to consider Voronezh and Rostov as part of Russia was about the only surprise of that meeting (her advisors quickly explain to her that these cities was not in the Ukraine).  She even “dressed Russian” in spite of the fact that it is warmer in Moscow than in London (she forgot the obligatory bottle of vodka and a balalaika!).

That’s what you get for appointing a stupid, arrogant and ignorant id*ot to such a high position.  But, at least, she is a woman (collective sigh of relief from the Woke crowd…).

Tomorrow the UK Minister of Defense will visit Moscow.  I don’t expect anything to come out of this meeting either.

Frankly, I don’t even understand why the Kremlin is bothering with these clowns.  The most likely explanation is that the Russians will pretend to listen to whatever the Brits have to say, then explain to them what will happen to any UK military personnel if a provocation happens.

According to at least many sources (example), Russia has deployed a MiG-31K armed with the Kinzhal hypersonic missile in Kaliningrad.  The Russian A2/AD “lock” over Belarus and the Baltic Sea is taking shape.  Good.  The more Iskanders, Kalibrs, Kinzhals, Bals, Bastions, S-400 and Su-35S/Su-30SM2 are deployed in and around Belarus and Kaliningrad, the most mental sanity we can expect from the local nutcases and their overseas masters.

After a stop in Syria, the six large amphibious assault ships we were discussing recently have now entered the Black Sea and have now joined the Black Sea Fleet.   One source says that this gives the ships a combined capacity of up to 63 main battle tanks and about 2,000 troops.  Apparently, they were escorted by a Kilo-class diesel-electric attack submarine.  Russia has also sent two 11,500-ton guided-missile Slava-class cruisers and escorts to the Mediterranean.  140 Russian warships worldwide are participating in these huge exercises.

Here is the zone they have prepared for their naval exercises in the Black Sea and Sea of Azov:

Remember how the Russians forced a Ukie drone to land in Belarus?  That just happened again, but in the LDNR.  Check out the markings the Ukronazis painted on the lower side of its wings.

BTW – this reconnaissance drone, the Lelekka, was supposed to be the nec plus ultra of the Ukie aerospace production.  So whatever nostalgics of the Third Reich painted these crosses, they were not silly teenager, but the folks entrusted with the operation of this very important (for the Ukies) drone.

The head of Russian intelligence, Sergei Naryshkin, has just declared that:

The SBU and the UAF are preparing provocations at the contact line in Donbass and their ‘reporting’ a la ‘White Helmets’ fakes news in Syria. The contingent of the ‘rapid response propaganda forces’ of the Western media has been increased there multifold as well,” Ukrainian preparations are going “full steam ahead” and they cannot be hidden”.  “All even partially combat ready Ukrainian Armed Forces units have been concentrated at the Donbass border. Hundreds of tonnes of military equipment and ammunition are being transported en masse from US bases in Europe, from the UK, from Canada. The contingent of advisors and instructors from NATO Special Operations forces is being increased. We even have reports about the emergence of multinational jihadist militant squads“.

I leave you with a funny picture: crowds in Mali celebrating the expulsion of the French ambassador and welcoming Russians (see the Russian flags in the crowd).

Zone B is growing!

Previous: Troops neutralise four IPOB, ESN gunmen enforcing sit-at-home in Anambra
Next: Nigeria Among Top 2 In The World For Bitcoin Searches On Google.