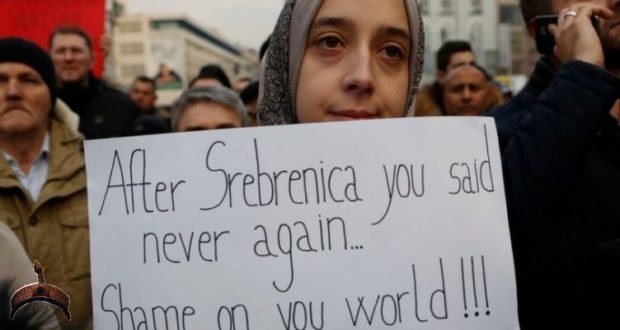 Is it finally the demise of the “men and boys” mantra?

Well, so far at least. Shocking as it may appear in the midst of the rejoicing that the terrorist occupation of Eastern Aleppo and the agony of tens of thousands of its helpless inhabitants are finally over, accumulated evidence suggests that the vengeful Empire was (and possibly still is) entirely prepared to inflict a “Srebrenica” style mass catastrophe as its parting shot.

Abundant political noise emanating from Western – mainly British – sources ahead of the downfall of the, until not long ago, seemingly impregnable terrorist stronghold in Aleppo suggests that an operational plan for a replay of Srebrenica was indeed hatched. It should have turned the military defeat of Western proxies into a resounding propaganda victory for their sponsors by staging in Aleppo a massive killing operation of civilians and blaming it on the Syrian government and its Russian allies.

The direct attempt at the beginning of December to extend the lifespan of the Aleppo terrorist enclave by putting it under UN authority mirrored what successfully had been accomplished in Srebrenica in April of 1993. The presence of “peacekeepers” and “observers” in such situations (Kosovo, 1999, also comes to mind) lends itself perfectly to the infiltration of intelligence personnel, who set the stage for what is to follow. However, the attempt to negate the successful advance of the Syrian army and to ensure that a “protected” enemy enclave would be ensconced in its rear, to serve as a launching pad for military and propaganda operations (as was done with Srebrenica during the war in Bosnia), this time failed dismally. The geopolitical relationship of forces has changed significantly since 1993, as evidenced by the Russian and Chinese vetoes that frustrated this time the repetition of the Srebrenica template.

But the imminent and unplanned fall of the Aleppo terrorist enclave still had to be compensated in a way that would create the required psychological preconditions for a Western “humanitarian intervention” to reverse the unfavorable outcome, in line with the R2P (Right to Protect) doctrine which has already been applied with lethal effect elsewhere.

In the wake of the unsuccessful December 5 2016 Security Council Aleppo Resolution, which failed due to Russian and Chinese vetoes, Western propaganda machinery, as if on cue, went into high gear with the familiar and ominous rhetoric which pointed unmistakably at Srebrenica.

The main speaker, former Chancellor of the Exchequer George Osborne, dramatically reminded that the “tragedy in Aleppo did not occur in a vacuum” but was the result of a “vacuum in Western and British leadership.” That was another familiar Srebrenica refrain, concocted to emotionally shame the public for tolerating the supposed inaction of its political leadership and to prod them into acquiescing to a foreign intervention that had, in fact, been carefully planned long in advance. (Facts recently emerging about advance preparations for the Libyan debacle should remove any doubts in that regard.)

Foreign Secretary Boris Johnston expanded on the theme: “Dictator Assad was allowed to perpetrate horrible crimes together with his allies, Russia and Iran.”

MP Andrew Mitchell solemnly reminded all present that Great Britain was a signatory to the international commitment to act “for the protection of threatened populations” and prevent “humanitarian catastrophes like Srebrenica and Rwanda.”

The key, Pavlovian phrase which Mitchell ultimately used gave the game away as to what the point was of the entire exercise: “I was in Srebrenica two years ago,” Mitchell said, “and I know what happened there – the same thing that is now going on in Aleppo, the mass killing of men and boys by forces loyal to the Syrian regime.”

“The people in Aleppo feel the same way we did,” Hasan says. “We felt like being abandoned and not belonging to this humanity,” he says. “Not being treated like a human. We keep repeating ‘Never again’ but when it comes to action, we don’t do anything to prevent those things from happening. “It seems the world hasn’t learned anything. We are living in this modern world with technology and we don’t have any excuses to say ‘We didn’t know’.”

As of this moment, a false flag operation in Syria, potentially dwarfing Srebrenica in 1995 and the one in Goutha in 2013, when Western proxy terrorists gassed over one thousand innocent Syrian civilians in the hope of provoking a NATO “humanitarian intervention” to save them from defeat, thankfully has not occurred. The evidence, however, is rather clear that the plan was (and may still be) on the drawing board. A concerted attempt was made (and it failed) to set up an operational infrastructure on the ground by inserting intelligence personnel in the guise of UN staff and by formalizing terrorist control over the East Aleppo enclave, by means including a ludicrous offer of monetary reward to President Assad if he agreed to such a scheme. At the same time, as we have seen, the propaganda groundwork was intensely being laid.

It is possible that the Russians and Syrians have learned the lesson of Srebrenica and that this has enabled them to successfully parry Western moves to recreate on the ground conditions that would make a false flag operation of a similar or greater order of magnitude operationally possible. The staging of a crime of immense proportions would obviously be required in order to mobilize the support of international public opinion for an intervention robust enough to reverse the momentum which currently favors Assad and the Syrian government. The false flag crime would also have to be of sufficient enormity, and the false leads pointing away from the real perpetrators convincing enough, for the Russians to be at least temporarily stunned and put on the defensive, long enough for Western (NATO) forces and their local proxies to regain the initiative.

So far, as we have seen, it has been all talk and little action. Inshallah it remain that way, as many innocent Muslim lives will thus have been spared. But when dealing with “folks” – to use the favorite term of an outgoing Western statesman – who do not have the habit of giving up, lowering one’s guard is an unaffordable luxury. This is a situation that bears careful and continuous watching. The pious perpetrators of Srebrenica do not take Srebrenica’s name in vain.

I doubt that this is a solely al-Qaeda induced incident. It seems to me that the certain U.S. forces (aka the CIA) are trying to prolong the removal of al-Qaeda from east-Aleppo for their own purpose… There are several “western” groups that want to keep the evacuation stalled to continue their anti-Syrian, anti-Russian and anti-Iran agenda… The French president Hollande, despised by his people and with an approval rating between 4 and 6%, is calling for another UN Security Council vote over east-Aleppo. Such a vote, demanding UN observers for the evacuation, is intended to hold it up. Observers would need days to be in place and would lack any reasonable protection. (Moon of Alabama, December 18, 2016, http://www.informationclearinghouse.info/46069.htm)

Moon of Alabama on the use of Information Warfare by US in Syria: http://www.informationclearinghouse.info/46081.htm

The sources for these reports are so-called ‘activists’. Who are they? As far as I know, there was not one single staff reporter for any Western news organisation in eastern Aleppo last week. Not one.