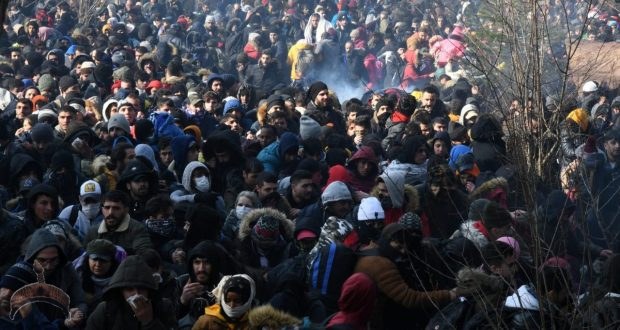 Posted by: BalogunAdesina in World News Comments Off on Empires of the steppes fuel Erdogan Khan’s dreams

By Pepe Escobar : posted with permission

As Putin meeting looms, no one in Moscow believes any word, promise or cajoling from Erdogan anymore

The latest installment of the interminable Syria tragedy could be interpreted as Greece barely blocking a European “invasion” by Syrian refugees. The invasion was threatened by President Erdogan even as he refused the EU’s puny “offer you can refuse” bribe of only one billion euros.
Well, it’s more complicated than that. What Erdogan is in fact weaponizing is mostly economic migrants – from Afghanistan to the Sahel – and not Syrian refugees.

Informed observers in Brussels know that interlocking mafias – Iraqi, Afghan, Egyptian, Tunisian, Moroccan – have been active for quite a long time smuggling everyone and his neighbor from the Sahel via Turkey, as the Greek route towards the EU Holy Grail is much safer than the Central Mediterranean.

The EU sending a last-minute emissary to Ankara will yield no new facts on the ground – even as some in Brussels, in bad faith, continue to carp that the one million “refugees” trying to leave Idlib could double and that, if Turkey does not open its borders with Syria, there will be a “massacre.”

Those in Brussels spinning the “Turkey as victim” scenario list three conditions for a possible solution. The first is a ceasefire – which in fact already exists, via the Sochi agreement, and was not respected by Ankara. The second is a “political process” – which, once again, does exist: the Astana process involving Russia, Turkey and Iran. And the third is “humanitarian aid” – a euphemism that means, in fact, a NATO intervention of the Libya “humanitarian imperialism” kind.

As it stands, two facts are inescapable. Number one: the Greek military don’t have what it takes to resist, in practice, Ankara’s weaponizing of the so-called “refugees.”

Number two is the kind of stuff that makes NATO fanatics recoil in horror: Since the Ottoman siege of Vienna, this is the first time in four centuries that a “Muslim invasion” of Europe is being prevented by, who else, Russia.

Fed up with sultan

This past Sunday, Ankara launched yet another Pentagon-style military adventure, baptized as Spring Shield. All decisions are centralized by a triumvirate: Erdogan, Defense Minister Hulusi Akar and the head of MIT (Turkish intel) Hakan Fidan. John Helmer has memorably called them the SUV (Sultan and the Ugly Viziers).

Behlul Ozkan, from the University of Marmara, a respected Kemalist scholar, frames the whole tragedy as having been played since the 1980s, now back on the stage on a much larger scale since the start of the so-called Syrian chapter of the Arab Spring in 2011.

Ozkan charges Erdogan with creating “conquering troops out of five unlikely fundamentalist groups” and “naming the armed groups after Ottoman sultans,” claiming they are a sort of national salvation army. But this time, argues Ozkan, the results are much worse – from millions of refugees to the terrible destruction in Syria, and “the emergence of our political and military structures affecting national security in a dangerous way.”

To say that the Russian General Staff are absolutely fed up with the SUV’s shenanigans is the ultimate understatement. That’s the background for the meeting this Thursday in Moscow between Putin and Erdogan. Methodically, the Russians are disrupting Turk operations to an unsustainable level – ranging from renewed air cover to the Syrian Arab Army to electronic countermeasures totally smashing all Turkish drones.

Russian diplomatic sources confirm that no one in Moscow believes any word, promise or cajoling emanating from Erdogan anymore. So it’s useless to ask him to respect the Sochi agreement. Imagine a Sun Tzu-style meeting with the Russian side displaying the very picture of self-restraint while scrutinizing Erdogan on how much he is willing to suffer before desisting from his Idlib adventure.

What ghosts from the past evolve in Erdogan’s unconscious? Let history be our guide – and let’s go for a ride among the empires of the steppes.

In the 5th century, the Juan Juan people, proto-Mongols as much as their cousins the White Huns (who lived in today’s Afghanistan), were the first to give their princes the title of khan – afterwards used by the Turks as well as the Mongols.

A vast Eurasian Turco-Mongol linguistic spectrum – studied in detail by crack French experts such as J.P. Roux – evolved via conquering migrations, more or less ephemeral imperial states, and aggregating diverse ethnic groups around rival Turkish or Mongol dynasties. We can talk about an Eurasian Turk space from Central Asia to the Mediterranean for no less than a millennium and a half – but only, crucially, for 900 years in Asia Minor (today’s Anatolia).

These were highly hierarchical and militarized societies, unstable, but still capable, given the right conditions, such as the emergence of a charismatic personality, to engage in a strong collective project of building political constructions. So the charismatic Erdogan Khan mindset is not much different from what happened centuries ago.

The first form of this socio-cultural tradition appeared even before the conversion to Islam – which happened after the battle of Talas in 751, won by the Arabs against the Chinese.  But most of all it all crystallized around Central Asia from the 10th and 11th centuries onwards.

Unlike Greece in the Aegean, unlike India or Han China, there was never a central focus in terms of a cultural berth or supreme identity organizing this process. Today this role in Turkey is played by Anatolia – but that’s a 20th century phenomenon.

What history has shown is an east-west Eurasian axis across the steppes, from Central Asia to Anatolia, through which nomad tribes, Turk and Turkmen, then the Ottoman Turks, migrated and progressed, as conquerors, between the 7th and the 17th centuries: a whole millennium building an array of sultanates, emirates and empires. No wonder the Turkish president pictures himself as Erdogan Khan or Sultan Erdogan.

So there is a link between the turcophone tribes of Central Asia from the 5th and 6th centuries and the current Turkish nation. From the 6th to the 11th centuries they were set up as a confederation of big tribes. Then, going southwest, they founded states. Chinese sources document the first turkut (Turkish empires) as eastern Turks in Mongolia and western Turks in Turkestan.

They were followed by more or less ephemeral empires of the steppes such as the Uighurs in the 8th century (who, by the way, were originally Buddhists). It’s interesting that this original past of the Turks in Central Asia, before Islam, was somewhat elevated to mythic status by the Kemalists.

This universe was always enriched by outside elements – such as Arab-Persian Islam and its institutions inherited from the Sassanids,  as well as the Byzantine empire, whose structural elements were adapted by the Ottomans. The end of the Ottoman empire and multiple convulsions (the Balkan wars, WWI, the Greek-Turkish war) ended up with a Turkish nation-state whose sanctuary is Asia Minor (or Anatolia) and eastern Thrace, conformed into a national territory that’s exclusively Turk and denies every minority presence that is non-Sunni and non-turcophone.

Even Hatay province, which joined Turkey in 1939, is not enough. Home to the historic Antioch and Alexandretta, Hatay was then re-baptized as Antakya and Iskenderun.

Erdogan Khan has proclaimed, “Idlib is mine.” Syria and Russia are responding, “No, it’s not.” Those were the days, when turcophone empires of the steppes could just advance and capture their prey. 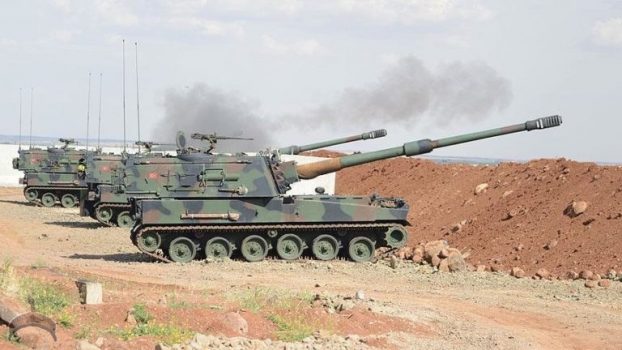 On April 23, the Turkish Ministry of National Defense announced that the Turkish commandos had carried out what it called a “large-scale operation” in northern Syria in response to a recent attack by Kurdish forces. In a statement, the ministry said that the operation, which was supported by artillery fire, targeted fighters of the Kurdish People’s Protection Units (YPG) and the Kurdistan Workers’ Party (PKK). The YPG is a key faction of the Syrian Democratic Forces (SDF), a Kurdish-led coalition ...