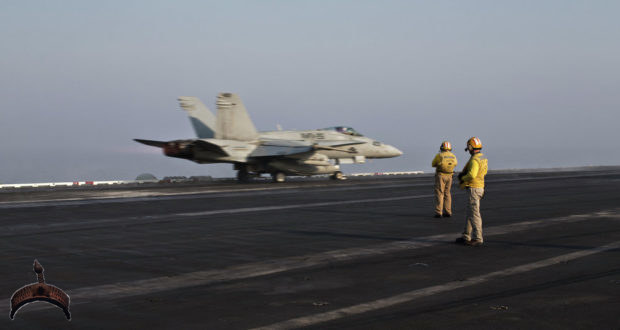 Posted by: BalogunAdesina in World News Comments Off on Middle East Is On Verge Of New War Following Trump’s Recognition Of Jerusalem As Israel’s Capital

On November 28, SouthFront released a video analysis entitled “Would Anyone Profit From a New War in the Middle East?”. The video said that despite tensions in the region the possibility of a new war in in the near future was relatively low because no regional player was interested in it.

The only side, which could be interested in the conflict, was the United States. Such a war will contribute to interests of the US military industrial complex and lead to a growth of oil prices. High oil prices will impact positively the US shale oil production sector.

However, it was hard to expect developments, which took place last week. On December 6, US President Donald Trump officially recognized the city of Jerusalem as Israel’s true capital and declared an intent to move the US embassy there. The decision faced a condemnation from the regional powers and the international community and sparked a new round of violence between the Palestinians and the Israelis.

Following Trump’s declaration, Politburo Chief of the Palestinian Hams movement Ismail Haniyeh called for an uprising against Israel in the West Bank and Jerusalem and declared December 8 the “day of rage”. Hezbollah released an official statement supporting Hamas’ intent and called on the Arab League and the Islamic world to provide a political, media, financial and even military support for the Palestinian people.

On December 7, the Palestinian al-Nasser Salah al-Deen Brigades fired several rockets at Israeli settlements north of the Gaza Strip. The group said in a statement that this was only the first response to the US decision and more actions will follow. The Israeli Defense Forces said that a battle tank and a warplane had targeted two posts in Gaza in response to the shelling.

On December 8, the al-Nasser Salah al-Deen Brigades once again shelled settlements in southern Israel. In response, Israeli warplanes bombed an alleged Hamas training compound and a warehouse in Gaza.

On the same day, large-scale anti-Israeli riots started across the Gaza Strip, the West Bank and Jerusalem. Israel responded with deploying security forces and the army. According to reports, at least two Palestinians have been killed and hundreds others have been injured in the ongoing violence so far. The Israeli government warmly welcomed the US decision and it is not going to tolerate any opposition from the Palestinians.

On December 7, Iraqi paramilitary group Harakat Hezbollah al Nujaba declared that Tump’s decision is a “legitimate reason” to attack US soldiers in Iraq.

“Trump’s stupid decision… will be the big spark for removing this entity [Israel] from the body of the Islamic nation, and a legitimate reason to target American forces,” Harakat Hezbollah al Nujaba leader Akram al-Kaabi said, according to Reuters.

Harakat Hezbollah al Nujaba is a part of the Popular Mobilization Units (PMU), an umbrella organization composing of various pro-government militias. The PMU is officially incorporated into the Iraqi Armed Forces. Thus, a part of the armed forces of one of the American allies in the war on ISIS now has an intent to attack US troops.

The new crisis started just days after the reduction of tensions among concerning parties involved in the recent escalation over Lebanon. Israel, Hezbollah and their backers are once again put on the verge of an open military conflict, which could easily start if the Israeli-Palestinian tensions develop further.

The US political elites could not have been unaware of expected consequences of the recognition of Jerusalem as Israel’s capital. Was this move a part of the system policy of the US or just a caprice of Trump and his inner circle?

When such irrational events happen, willing or not, an independent observer starts wondering about various conspiracy theories.

The situation is escalating. Israel is ready to implement active military measures in response to any actions of Hamas, Hezbollah or any other regional players. And the US president bears direct responsibility for the escalation in the region and possible casualties from the both sides.

Previous: Putin visits the Khmeimin base in Syria
Next: Vehicles on fire As Diesel-Laden Tanker Falls & Explodes In Festac.