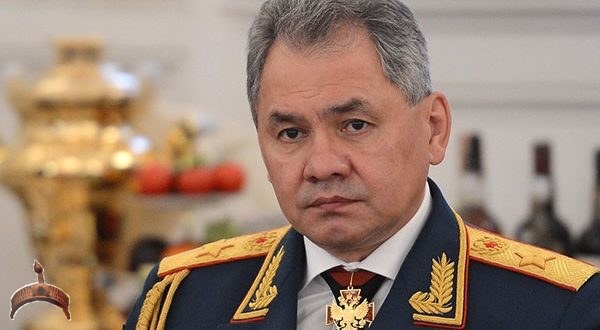 Posted by: BalogunAdesina in World News Comments Off on Shoygu reported to Vladimir Putin about successful liquidation of the head of ISIS

Today at the working meeting of the Russian Security Counsel the Defense Minister Sergey Shoygu reported to the Commander-in-Chief that the Russian Air Force in Syria liquidated more than 30 field commanders of the terrorist organization ISIS, likely including its leader Abu Bakr Al Baghdadi.

The report stated that on the night of May 28 Russian military planes Su-34 and Su-35 struck an ISIS command center near Raqqa. It was confirmed that as the result all participants of that clandestine meeting of the higher ISIS leadership were liquidated. Military authorities said that the leader of ISIS (as confirmed by many sources) was among the participants.

In the end of May of 2017, the command of the Russian troops in Syrian Arab Republic obtained information that in the Southern suburb of Raqqa the leadership of terrorist group ISIS will be holding a meeting.

During checking of this information, it found that the goal of the meeting was to plan the retreat of the militants from Raqqa via so-called “Southern corridor”.

The strikes of Su-35 and Su-34 liquidated high-ranking commanders of the terrorist group who were members of the so-called Military Counsel of ISIS, as well as about 30 mid-ranking field commanders and up to 300 militants of their bodyguard.

Among liquidated terrorists were Emir of Raqqa Abu Al-Haji Al-Mysri, Emir Ibrahim An-Naef Al-Haj, who controlled the area from Raqqa to Es-Suhne, and the commander of ISIS security Suleiman Al-Shauah.

The airstrike occurred on May 28, and since then the terrorists tried to suppress the information about the demise of their leader. However, today the Defense Minister Sergey Shoygu personally reported to Vladimir Putin about possible liquidation of Al Baghdadi.

The liquidation of the ISIS leader is supported by the fact that meeting of this level and importance usually do not occur without the participation of the leader of the organization. Moreover, the strike happened on May 28, but was disclosed only after several weeks of painstaking verification of the information.

At the same time, presentation of unambiguous information regarding the liquidation of the terrorist leader is hard, because it is impossible to conduct identification of the bodies at the site of the strike. The territory where this command center was located remains in the hands of the enemy, the Western media purposefully suppress any information, and the place of the Russian airstrike at this “fatal military counsel” is now an even and totally burnt out wasteland.

In the future, one cannot exclude staged scenes with “live” Al Baghdadi (on poor quality video translated by Western media), but the fact that this information was reported to the President leaves little doubt that it is correct.

After the siege of the Syrian Raqqa (by the US-led coalition) became more active and the top leaders of ISIS were destroyed by Russian Air Force, the capital of the terrorist group was moved again to a new place.

Right now, most of the ISIS field commanders left Raqqa and moved to the city Al-Mayadin in Deir-ez-Zor province. Previously, ISIS leadership from Iraqi Mosul also moved there.

Why this insignificant (considering its size) city is so important? Why after the demise of top leaders did their sidekicks moved there from everywhere? The answer: because of resources (oil, natural gas) and its strategic (for all involved) location.

The thing is, the Americans started their war in Syria not only to control the price and sources of oil and gas, but also to put pressure on Russia (details here). To this end, directing the terrorists to the Central Asia (the Russian underbelly) was one of the key objectives, and the construction of a huge pipeline Persian Gulf – EU was supposed to be its final economic achievement. Next, that was supposed to be followed by explosions all over Russia (with concomitant fall of the economy and standards of living), organization of “opposition rebellions”, Western “support of the press”, “sweet promises”, and “democratic” replacement of Putin and “elites” by those subservient to the US.

The next few years showed that the American strategy was too ambitious, but despite the Russian victories, its implementation in Syria not been completely stopped.

Thus, while the war is approaching its logical end, the US desperately needs to take possession of the largest possible and most convenient parts of pro-American Syrian territory, and via those, without deposing Assad, build those coveted oil and gas pipelines.

The first attempt to get this territory was made just a few weeks ago. Thanks to the able actions of the Russian Ministry of Defense it failed miserably (details here). The second attempt is being made right now and it is directly connected with little known Syrian township Al-Mayadin.

Al-Mayadin is a little hamlet in Deir-ez-Zor province, right next to the Euphrates river. In addition, it is located in the middle of rich Syrian deposits of oil and natural gas, and the shortest route (based on geological considerations) for the oil and gas pipelines from the Persian Gulf to the Mediterranean goes through the territories nearest to it (which was the greatest desire of the US from the start).

Thus, Al-Mayadin became the most contested point for the US, terrorists, and Russia.

To block the American scenario, the Russian coalition needs full control of the diagonal from the Northwest to the South-East of Syria, i.e., the whole territory along the Western bank of Euphrates. To the dismay of the US, this is quite achievable for the Russian coalition.

That is exactly why Washington, via Pentagon, recently intensified the attack on Raqqa and hastily announced that the area around Euphrates, including Deir-ez-Zor province, suddenly became the area of “increased American interests”. This statement is quite ironic, as “the area of interests” completely overlaps with the region of the richest Syrian oil and gas deposits.

In the near future, the Russian and American coalitions will rush to outcompete each other in taking the “capital” city of Al-Mayadin and oil- and gas-rich areas along the Western bank of Euphrates.

Meanwhile, the successes of the Russian operation are leading the war in Syria to its final conclusion. The closer it becomes, the more “financial” Russophobic nightmares will trouble the “civilized world”…