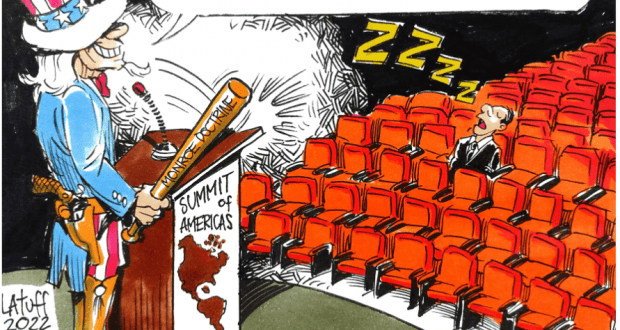 Posted by: BalogunAdesina in Breaking News, World News Comments Off on Sitrep Operation Z: Not your normal sitrep

By Amarynth for Ooduarere via the Saker Blog

We abandon our usual format for a different take.

How long can we stare into this carnage of killing without losing part of one’s own soul. https://t.me/mod_russia_en/1969

Missile troops and artillery have hit 128 command posts, 169 firing positions of artillery and mortar batteries, as well as 623 areas of AFU manpower and military equipment concentration.  The attacks have resulted in the elimination of up to 200 nationalists,

Operational-tactical, army and unmanned aviation have hit 61 areas of AFU manpower and military equipment concentration.  ▫️The attacks have resulted in the elimination of more than 140 nationalists,

This is in one day, a snippet from the Russian MoD report, not counting the night.

How long can we stare into the masks falling off the evil and foolish faces of all in the hegemonic declining powers, selling lies.

Just 24 hours after insisting he wouldn’t supply Kiev with long-range missile systems, Joe Biden has flip-flopped and now pledged “more advanced” anti-tank, anti-aircraft and precision systems after being pressured by officials – including Obama’s ambassador to Russia.

Biden claimed the US was not “encouraging or enabling Ukraine to strike beyond its borders” and didn’t want to prolong the war or enter conflict against Russia, but his move was viewed “extremely negatively” by Moscow.

China Conducts “Necessary” Military Drills Near Taiwan After US “Collusion”

Chinese military commanders have confirmed recent seaborne and airborne military drills near Taiwan as a “necessary action” following what they call “collusion” between the US and Taipei.

Last week President Biden reiterated American intentions to back Taiwan militarily in the event of an invasion, while Senator Tammy Duckworth arrived for a surprise 3-day visit on Monday.

PLA Commander Shi Yi insisted Washington’s support “will push Taiwan into a dangerous situation” and the US “itself will face serious consequences.”

How long can we stare at Zelenski the dick on the televisions and newspapers and internet of the day without remaining nauseous?

How long can we stare at the ludicrousness of Ukie coping while all around are dying.

DHS is 'concerned' over Nazis returning after fighting in Ukraine. I examine two Americans now fighting Russia, one a veteran of various street brawls against leftists and the other a lunatic that murdered a couple in Florida & tortured women in Donbas https://t.co/3zkGHAznhN

How long can we stare at the videos of a small girl killed by Ukies, convinced that she is their enemy. https://t.me/EurasianChoice/14503

How long can we stare into this abyss of dead human beings and the continuing supply of weapons.

How long can we stare into the projections of the western madness onto Russia, saying Russia did something, while it is their own actions being projected.

How long before people understand that Russia is rebuilding in the footsteps of the SMO, fixing what is broken. First ship leaves port after liberation of Mariupol — Southern Military District https://tass.com/economy/1458209?utm_source=startpage.com&utm_medium=referral&utm_campaign=startpage.com&utm_referrer=startpage.com

How long before people stop saying: Russia Should …..

In my email box, I receive interesting solicitations. This one came in from the Ukraine:

Please can you help me secure my wife and three kids in your country that are currently in danger here in Ukraine? I have enough money available to perfect the mission!

God bless you and Your help to us will reward you 30%.

Spam you say? This is a legitimate High Level Ukrainian commander who was even awarded the title of a Hero of the Ukraine and even on Wikipedia, the details fit. A shallow forensics show up that the IP is correct, there are no spam tracks and without detailed forensics, this looks legitimate. If it is, he is asking Russian oriented people for help! Fancy that!  Those brave Ukrainian fighters ….

But where is the opposition?  We start here — this video is the sitrep for today. Larry took time and recorded a professional video. The most important sentence in there, is: “We Have To Stop This” and it was a cry from the heart.

This is my cry today. How Long? And We have to Stop This!

More opposition:  A little about CELAC, the new and building Latin American organization, that stepped up and are stopping it, in the face of Biden’s Summit for the Americas. You all remember the Summit for Democracy?

The hegemon is being shot down, brought down, talked down, financed down, and downing itself. These young people are saying We Have to Stop This!

"We don't have to go along with the charades of what they call 'democracy'. We can defend our own project of integration in the region." @AbeMarquez3 hears from @manolo_realengo ahead of next week's @PeoplesSummit22 pic.twitter.com/Sh3jD07uwj

To answer the question: How Long? Just a little longer until we start talking about
404-CollectiveWest.

Previous: Sitrep Operation Z: We’re going down
Next: Grief days with changes in Narrative… or why Trolls are Doomed