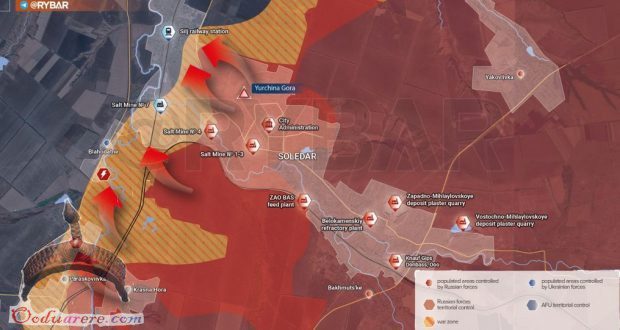 The Ukraine loses Soledar and Artemovsk

Posted by: BalogunAdesina in World News Comments Off on The Ukraine loses Soledar and Artemovsk

Having abandoned the Christmas truce, Kiev received painful breakthroughs in the defense line in the Donbass. The Russian Armed Forces have achieved decisive success in Soledar and Artemovsk-important strategic points that the Ukrainian command is trying to hold at any cost, including for political reasons.

As of January 9, fighting is already underway in the center of Soledar and in the area of five-story buildings in the northeast of the city. Two railway stations, a number of salt mines, and residential buildings in the south and southeast along Oktyabrskaya Street have come under the control of the Russian Armed Forces. The village of Bakhmutskoye in the southwest of Soledar has also been cleared.

Units advancing from the east, from the village of Yakovlevka, went to the area behind the Transfiguration Church, and assault detachments – to Yurchina Gora, cutting the section of the highway to Blagodatnoye, that is, stopping the supply of the group in the strategically important Seversk.

According to the newspaper VZGLYAD, by midday, fierce battles began for the building of the Soledar administration and for the neighboring House of Culture, in other words, for the city center. Satellite images show a large fire near the central square. The defense of the Armed Forces of Ukraine has become fragmented, it no longer has a single management and is divided into separate groups.

The day before, the withdrawal of the 128th separate mountain Assault brigade of the Armed Forces of Ukraine began, which quickly turned into a flight. The 61st Separate Mechanized Brigade also began to leave its positions, despite attempts to urgently strengthen it with reserve battalions. As a result, it abandoned its positions, which led to the flight of the 10th mountain assault brigade, as well as the 17th tank brigade-it was the last operational reserve that was supposed to hold Soledar and plug holes in the defense.

However, ideologically motivated units of the Armed Forces of Ukraine, including the special forces “Karpaty” and separate units of mountain assault brigades, tried to hold observation posts in five-story buildings on Karpinski Street, so it was premature to talk about the occupation of Soledar. But on Monday, Ukrainian units (or rather, their remnants) retreated to the northwest of the city in the area of “Artemsoli” and the railway station “Sol”.

Theoretically, this can be called the third line of defense, which boils down to an attempt to stay on the outskirts until the reinforcements announced by Zelensky appear (it is assumed that we are talking about newly formed “numbered” brigades from those mobilized in the Chernihiv region, which have been undergoing combat coordination at the Goncharovsky training ground for the last month).

The second task of the AFU remnants in the city is to prevent Russian troops from quickly reaching the north of Soledar and cutting the road to Seversk. In fact, it has already failed, since the intersection of the road to Seversk (the corner of Oktyabrskaya and Pionerskaya streets) has already been put under fire control by the Russian Armed Forces.

The situation also changed dramatically near Artemovsk (in the Ukrainian manner – Bakhmut). By the morning of January 9, units of the Russian Armed Forces had dislodged the combined detachments of the 60th and 17th Separate Mechanized brigade from the village of Podgorodne, which opened up the possibility of encircling Artemovsk from the north. In the south and south-east of the city, the destruction of fortified areas in the villages of Opytne and Kleshcheyevka and the cleaning of the territory around the gypsum factory (KNAUF) on Patrice Lumumba Street took place.

The AFU constantly transferred reinforcements from the reserves of the 60th Separate mechanized brigade, as well as two armored groups of the 28th mechanized brigade, separate special forces companies and teroborona to Artemovsk. Presumably, the nearest reserve of the Armed Forces of Ukraine will be the 58th ompbr and 93rd ombr from the same Chernihiv region. A couple of numbered brigades, which are being hastily transferred from the Zaporozhye direction to Bakhmut, will not have time to go there.

The main form of defense of the Armed Forces of Ukraine in Soledar and Artemovsk was indiscriminate shelling by the artillery division of the 60th Separate Mechanized brigade and the 17th tank Brigade, which are located outside the contact combat zone. Five Su-25s and two MiG-29s were also connected from the Mirgorod airfield.

The comical fortifications built on the central streets of Soledar in the form of traditional anti-tank shafts made of welded rails turned out to be of no use to anyone.

According to some data, the active transfer of AFU reserves near Soledar and Artemovsk will be able to begin no earlier than January 20. Consequently, they will hold a new line of defense, west of the broken Artemovsk – Soledar – Seversk system.

In the middle of the day on January 9, reports began to arrive that assault detachments began clearing Opytne south of Artemovsk and entered the villages of Krasnaya Gora and Paraskoviyevka. The last two are small, even by local standards, settlements along the railway, but they are tactically important positions, as they close the encirclement of Artemovsk from the north, cutting off the local Ukrainian garrison from Soledar. When this success is consolidated, the entire area between Artemovsk and Soledar will come under the control of the Russian Armed Forces.

The clearing of small villages south and southwest of Artemovsk threatens the supply of the local garrison. The new line of defense of the Armed Forces of Ukraine will be built, as in Soledar, along the western outskirts of the city, and then along the settlement of Chasov Yar, which over the past few months has been turned by the Armed Forces of Ukraine into the main stronghold of the entire Ukrainian group, as well as into a distribution point for incoming reserves.

Chasov Yar is a good position, historically located in this town are quarries of refractory clay (the factories themselves have not been working for a long time, but they are a convenient “promka”for defense). In addition, the Seversky Donets – Donbass canal flows right in front of Chasoviy Yar, which even in cold weather (on Monday in the Donbass minus 12-15 Celsius) is a defensive position.

First, the pressure on Kremennaya and Lysychansk will stop, and the entire flank of the Ukrainian front will sag in this direction.

Secondly, the creation of a new line of defense (approximately around Chasova Yar) will require special efforts from Kiev. Already, about six numbered brigades that made up the garrisons of Artemovsk and Soledar have been almost destroyed, and they need to be rotated and re-equipped with new recruits.

In recent weeks, these garrisons have been maintained at the expense of “veteran” units, including mountain assault units, highly motivated “svidomykh” and special forces. The new numbered brigades, made up entirely of ideologized sergeants and veteran officers mobilized with small participation, show poor effectiveness.

At the moment, the line of defense of the Armed Forces of Ukraine is broken, and the Ukrainian command will not be able to return the situation back. However, it is still too early to talk about the full occupation of Artemovsk – Kiev will hold this locality until the last one for ideological reasons.

Even now, its further defense is meaningless, but there are no signs of withdrawal of the AFU units from the city. Moreover, there is evidence that in the center of Artemovsk, fortified areas are being created on the model of Soledar, and the Ukrainian Armed Forces continue to insist on strengthening the grouping in the city, including at the expense of units from the southern direction.

On the other hand, there are reports that the Ukrainian Armed Forces are increasing their presence in Ugledar, which may also mean preparations for a counteroffensive in the southern direction. So far, the pace of the Russian Armed Forces ‘ advance in Soledar and around Artemovsk is quite high, but unpleasant surprises are still possible.