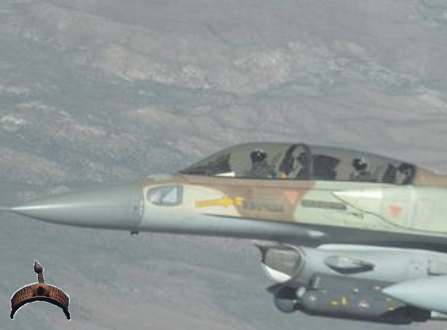 Posted by: BalogunAdesina in Breaking News, World News Comments Off on Syrian Army: Israeli Jet Shot Down, Another Hit

The Syrian army says four Israeli jets breached the Arab country’s airspace on Friday morning, adding its air defense shot down one of the aircraft and hit another.

Israeli warplanes “penetrated our airspace at 2:40 a.m. (0040 GMT) via Lebanese territory and hit a military target on the way to Palmyra,” said an army statement carried by state news agency SANA. “Our air defense engaged them and shot down one warplane over occupied territory, hit another one, and forced the rest to flee,”  the army said, apparently referring to the Golan Heights.

Israel’s aerial assaults are “a desperate attempt to raise their (Daesh terrorists’) deteriorating morale and divert attention away from the victories which Syrian Arab Army is making in the face of the terrorist organizations,” the statement read.

The Syrian army recaptured Palmyra from Daesh on March 2. In January, the army accused Israel of carrying out missile strikes on the Mazzeh air base near Damascus.

The Syria army underlined its resolve to repel any future Israeli attack by “all possible means.”  Israel has carried out air raids against Syrian-based targets on many occasions, but it rarely acknowledges the attacks. On Friday, however, the Israeli military acknowledged that its jets bombed several targets in Syria.

In a statement, the military said the Syrian air force fired numerous anti-aircraft missiles at the warplanes and the Israeli air force “intercepted one of the missiles.”

The explosion caused by the incident set off sirens in the Jordan Valley of the West Bank and the blast was heard as far as Jerusalem al-Quds, according to the Israeli military statement.  The Israeli military later said in a separate statement that its aircraft were unharmed in the operation.

Israel and Syria are technically at war due to Tel Aviv’s continued occupation of the latter’s Golan Heights since 1967. Tel Aviv has also been supporting the militants operating to topple the Syrian government.

Some of the attacks have reportedly struck targets belonging to the Lebanese resistance movement of Hezbollah, which has been assisting the Syrian military in the face of the militancy.  In addition, Israel has been offering medical treatment to the militants fighting Assad, who would reach Golan as well as entering the Syrian territory to carry out spying operations.

Late last month, Israel’s Channel 2 said the regime had sent its troops on repeated spying missions into a village located half a kilometer inside Syria’s territory.

Previous: Syrian War Report – March 17, 2017: ISIS Defenses Collapsing Across Syria
Next: What happened and why