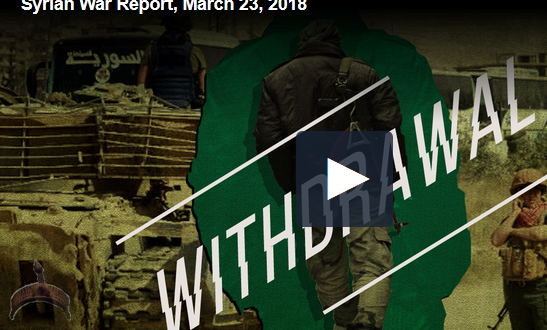 Posted by: BalogunAdesina in World News Comments Off on Syrian War Report – March 23, 2018: Militants To Withdraw From More Areas In Eastern Ghouta

On March 22, the Turkish Armed Forces (TAF) and the Free Syrian Army (FSA) captured the villages of Baay, Basufan, Kafr Nabu and Burj Haydar south of the city of Afrin from the Kurdish People’s Protection Units (YPG). According to unconfirmed reports, the TAF’s artillery even shelled positions some of the Syrian Arab Army north of the city of Aleppo.

Since the fall of Afrin on March 18, the TAF and the FSA have been slowly but steadily expanding their control south of the city. Some local sources indicate that Turkey considers an advance in order to take the town of Tell Rifaat, near which Syrian government forces had established a number of checkpoints.

Meanwhile, YPG members continue conducting hit-and-run attacks against Turkish forces in the area of Afrin formally controlled by the TAF and the FSA.

U.S. State Department spokesperson Heather Nauert announced on March 22 that U.S. forces are not going to leave Manbij and no agreement had been reached between Washington and Ankara on the issue. The US-Turkish relations over US support to the YPG and especially, the YPG presence in Manbij, remain complicated.

Meanwhile, the Turkish media speculates that Turkey is preparing to launch a military operation against the Kurdistan Workers’ Party (PKK) in the area of Sinjar Mount in northern Iraq. The advance will allegedly be entitled Operation Tigris Shield and may take place after Iraqi elections set for May 12.

In the Damascus suburb of Eastern Ghouta, a first batch of Ahrar al-Sham militants left the area of Harasta on March 22. On the next day, the evacuation continued.

Meanwhile, reports appeared that the Syrian government and Faylaq al-Rahman have reached a ceasefire agreement, which is set to be implemented on March 23. If the agreement succeeds, the withdrawal of Faylaq al-Rahman members from Ain Tarma, Ebreen and nearby areas are expected by pro-government experts in the near future.

The ceasefire agreement followed reports that the SAA had established full control over Ain Tarma’s farms and started preparing to storm this key militant stronghold.

According to the Russian military, about 95,000 people have left the militant-held area of Eastern Ghouta since the implementation of the daily humanitarian pause on February 28.

The expected liberation of Eastern Ghouta will further impact the balance of powers in Syria and will open an opportunity for the SAA to launch a large-scale operation against ISIS in southern Damascus where the situation has recently deteriorated.

Previous: “This terrible Russian youth”
Next: Meme of the day: How VVP gave the order :-)