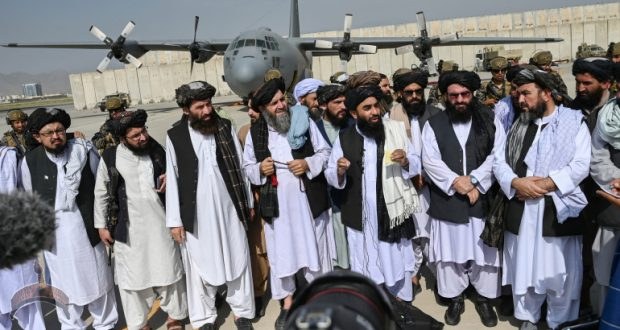 Taliban spokesman Zabihullah Mujahid (C, with shawl) speaks to the media at the airport in Kabul on August 31, 2021. - The Taliban joyously fired guns into the air and offered words of reconciliation on August 31, as they celebrated defeating the United States and returning to power after two decades of war that devastated Afghanistan. (Photo by WAKIL KOHSAR / AFP)

Posted by: BalogunAdesina in World News Comments Off on The Taliban, 9/11, the Empire, MAGA eastern wet pampers

by Andrei for Ooduarere via the Saker Blog

Most of you must have heard it: the Taliban will organize a major celebration on September 11th to mark the liberation of Afghanistan from the US occupation and the creation of the new Afghan government.  The Russians and the Chinese have been invited.  As are the Pakistanis.  Not sure about Iran (do you know?)?

The Afghan government could be called a “GITMO government” since 5 members are former GITMO hostages and one, the head of security/intel, is still on the FBI most wanted list.

Needless to say, the Taliban had nothing to do with 9/11.  As for Bin-Laden and al-Qaeda they were somewhat involved, but only as “patsies”.

But the US government declared that the Taliban guilty and invaded Afghanistan.

Twenty years later, the Taliban are in total control and the US has probably executed one of the dumbest, worst and generally immoral military operation in history.  And 20 years later, the US was totally defeated.  Not by Russia.  Not by China.  Not by Iran.  Not even by Venezuela.  By the Afghans, after 20 years of warfare and trillions spent.

As for what the Taliban will do this Saturday, it can’t even be called “spitting in Uncle Shmuel’s face”.  It’s even more than that.  Maybe we could speak of “urinating into Uncle Shmuel’s face” or some other even ruder metaphor showing both the total and utter contempt in which the Taliban hold not only the USA but the entire AngloZionist Empire AND somehow express the magnitude of the humiliation inflicted upon the USA.

I lack the words to come up with a suitable metaphor.

Can somebody come up with something sufficiently powerful?

Also, and especially for the MAGA folks out there:

CNN has reported that the entire “Ukie plan” to kidnap Russian PMCs was organized by the CIA and botched by the Ukies.  The harcore Ukronazis are now accusing CNN of either being “duped by the FSB” or even for being used by Putin personally.  Or both.

Anyway, what this goes to prove that Trump approved a clear terrorist attack against Russia.  Either that, or he did not even know about it, which might be worse…

And you guys are seriously discussing his possible comeback?!?!

I saw an interesting poll somewhere (sorry, don’t remember where exactly) which shows that 49% of US Americans feel safer than on 9/11 20 years ago and 41% feel less safe.

And that is the real outcome of this monumentally evil and stupid Neocon plan.

After 20 years of warfare, pompous self-aggrandizement, many thousands dead and maimed and trillions spent.

Nothing will ever wash off this shame from the awareness of folks in Zone B and even many in Zone A.

Finally, today the Ukronazis shelled the Donbass again, with howitzers and mortars.  They were aiming at a water pumping station, miss and wounded/killed a couple.  Either way, this is a warcrime.  The Russians have declared that they have the designation of the unit which fired and the name of the commander who gave the order.

Which is all very predictable, since 1) US officials just visited the Ukraine 2) the CNN story is a HUGE scandal in the Ukie Rada and 3) Zelenskii is desperate to show that he might still be useful to the USA.

As for the Poles, they are fearing Russian invasion, so they put bared wire (I kid you not!) along their eastern border.  Which remind me of a Russian joke: a man walks down the street minding his own business, when he sees a woman on a balcony screaming “help! he wants to rape me! help!!!” from the top of her lungs.  The man looks up and says, “ma’am, calm down, I have no interest in you whatsoever and you are on the balcony while I am in the street” to which the woman replies, “yeah, maybe, but I can come down!“.

The Russian military is engaged in some large and serious, not fake, military maneuvers: 200’000 soldiers in both Russia and Belarus.  Hence all the wet pampers in eastern Europe (especially in Poland – the “hyena of Europe” always was a cowardly animal).

The Poles have even predicted the date of the Russian invasion: tomorrow (not a joke)

I have terrible news for Poland, the Baltic statelets and the Ukraine: nobody in Russia has any need for you, or your land.  Nobody.  Oh, and, for your information: “defenses” like walls, barbed-wires or even trenches cannot stop a modern military, such crap would not even slow the Russians down.

Summary: both Biden and Zelenskii might get impeached or otherwise removed.  That’s won’t solve anything for the US or the Ukraine, but sheer magnitude of their incompetence and stupidity makes such an outcome quite possible.

Not even in my most wildest and craziest dreams could I ever have imagined such a quick and total collapse of the Empire and of the USA.  I have to pinch myself several times a day, each time I get the news 🙂

Previous: FG Replies Afenifere, Says Farm Estates Not Ruga, Ranches
Next: Eating Meat Last: Why Do Most Nigerians Do This? 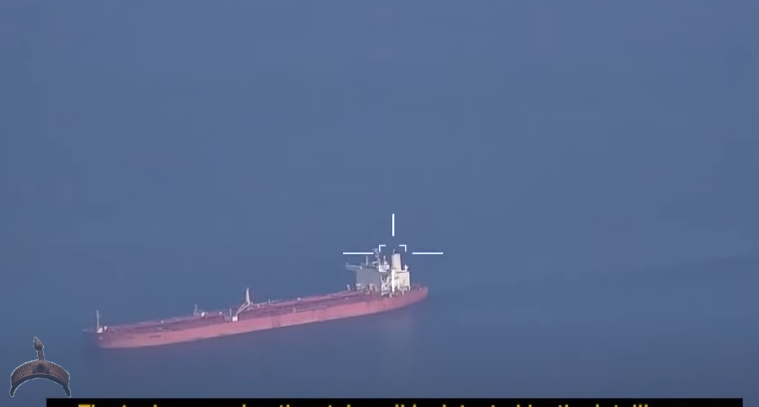 Lot’s of things happening at the same time (UPDATED)

Let’s begin with a few headlines: Pentagon says world will have three ‘great powers’ – and US will be ‘challenged’Biden ready to change US nuclear weapons policy – reportsThe US imposes sanctions on NicaraguaIRGC releases footage of blocking US oil seizure The first two seem to point to a US realization that war against China and Russia is unwinnable and that the USA simply does not have the means to impose a global world order run by one hegemon.  Some ...