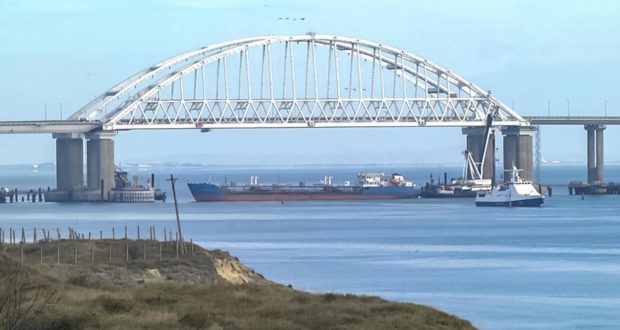 Posted by: BalogunAdesina in World News Comments Off on FSB Statement Concerning Illegal Actions of the Ukrainian Navy Ships Within the Territorial Sea of Russia

Reference to the quoted articles of law:

Articles 21 and 22, Sea lanes and traffic separation schemes in the territorial sea

safety of navigation and regulation of ship traffic, including the use of sea corridors and traffic separation schemes.

After crossing the state border of the Russian Federation, the Ukrainian Navy ships proceeded to the Kerch-Yenikalsky channel in violation of the licensing procedure established by the order of the Ministry of transport of Russia dated October 21, 2015 № 313 “On Approval of Mandatory Regulations in the Seaport of Kerch”.

The detained military vessels of the Ukrainian Navy were armed with the following types of weapons and ammunition:

The inspection of the detained Ukrainian military boat “Nikopol” discovered a document titled: “A Checklist of Readiness of the boat “Nikopol” for the sea deployment from 9.00 to 18.00  from 23.11.2018 to 25.11.2018 of the current year” in which a senior of the group of ships was given a direct order to make the transition from Odessa to Berdyansk in the “covert order” while “focusing on ensuring a stealth approach to the Kerch-Yenikalsky channel and passing through it.”

Besides, on the same boat was found a hand-written summary of the rules of navigation established by the Russian Federation for the Kerch-Yenikalsky channel, from which follows that the Ukrainian seamen were well informed on the order of its passing.